Space Exploration Technologies (SpaceX) recently conducted its first Dragon spacecraft operations training for a group of NASA astronauts and personnel at its corporate headquarters in Hawthorne, California. The October training focused on how the crew will interface with the Dragon spacecraft while it is approaching and berthed to the International Space Station (ISS). 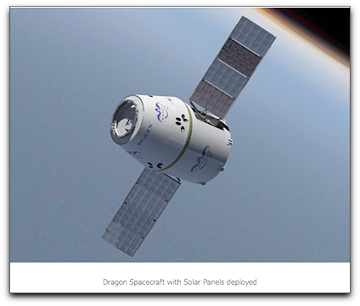 Three of the participating astronauts — Tracy Caldwell Dyson, Shannon Walker and Douglas Wheelock — will be on board the ISS when Dragon makes its first visit under the Commercial Orbital Transportation Services (COTS) program. The astronauts were briefed on vehicle ingress and egress, habitability of the spacecraft, payload handling and commanding through SpaceX's Commercial Orbital Transportation Services (COTS) Ultra High Frequency (UHF) Communication Unit. The training was a key step in SpaceX's progress towards providing NASA an alternative for cargo transport to and from the ISS when the Space Shuttle retires.

Also in attendance were NASA astronauts Marsha Ivins and Megan McArthur, as well as other key NASA personnel from the NASA Astronaut Office and Mission Operations Directorates. Under the COTS program, SpaceX will execute three flights of the Dragon spacecraft. Dragon will pass in close proximity to, and berth with, the ISS as part of the second and third COTS missions, respectively. Upon completion of these demonstration flights, SpaceX will begin to fulfill the Commercial Resupply Services (CRS) contract for 12 cargo flights between 2010 and 2015 and represents a guaranteed minimum of 20,000 kg to be carried to the ISS.