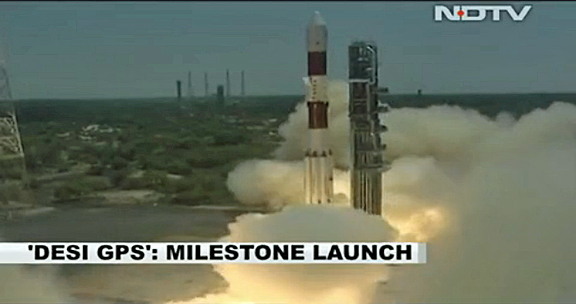 The launch of India's seventh and final satellite, IRNSS-1G, via a PSLV rocket from the launch pad in Sriharikota.

Image is courtesy of NDTV.

After a flight of 19 minutes 42 seconds, IRNSS-1G was injected into an elliptical orbit of 283 km X 20,718 km inclined at an angle of 17.867 degree to the equator (very close to the intended orbit) following which the satellite successfully separated from the PSLV fourth stage.

After separation, the solar panels of IRNSS-1G were deployed automatically. ISRO's Master Control Facility (MCF) at Hassan, Karnataka took over the control of the satellite. In the coming days, four orbit maneuvers will be conducted from MCF to position the satellite in the Geostationary Orbit at 129.5 degrees East.

IRNSS-1G is the seventh of the seven satellites constituting the space segment of the Indian Regional Navigation Satellite System. IRNSS-1A, 1B, 1C, ID, IE and 1F,  the first six satellites of the constellation, were successfully launched by PSLV on July 02, 2013, April 04, 2014, October 16, 2014, March 28, 2015, January 20, 2016 and March 10, 2016 respectively. All the six satellites are functioning satisfactorily from their designated orbital positions.

A number of ground facilities responsible for satellite ranging and monitoring, generation and transmission of navigation parameters, etc., have been established in eighteen locations across the country.  Today’s successful launch of IRNSS-1G, the seventh and final member of IRNSS constellation, signifies the completion of the IRNSS constellation.

India is now one of five countries with its own navigational system, meaning the nation is free of dependence upon other countries for their navigation needs. The name, NAVIC (Mariners), is in honor of India's mariners and fisherman who have been navigating using the sun and the stars as waypoints for hundreds of years.