UPDATE: Russian Express-AM6 Satellite Is Off + Away Via A Proton-M 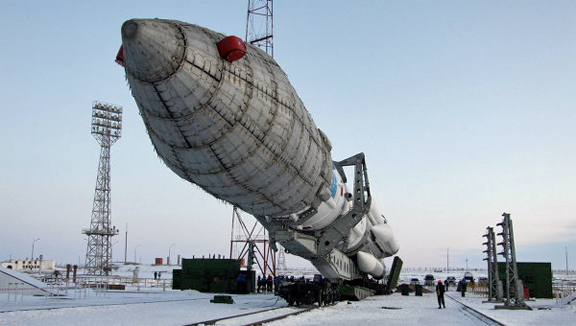 The Russian Express-AM6 telecommunication satellite launched via a Proton-M carrier rocket from the Baikonur space center in Kazakhstan.

[SatNews] A Russian Express-AM6 telecommunication satellite was placed into orbit after its launch on board a Proton-M carrier rocket from the Baikonur space center in Kazakhstan, a representative of Russia's Federal Space Agency Roscosmos told RIA Novosti on Wednesday.

"The satellite detached successfully from the Briz-M booster," an agency representative said, specifying that the satellite is now firmly in its calculated orbit.

Based on the heavy-class Express-2000 platform, the spacecraft will have an active lifespan of 15 years and carry 11 antennas, as well as 72 C-, Ku-, Ka- abd L-band transponders, according to Russia’s Reshetnev Company, which designs and builds Express-series satellites. The Express-AM6 telecommunications satellite will be operated by the Russian Satellite Communications Company (RSCC) to provide a comprehensive range of communications and broadcasting services in the Russian territory.

This is the second launch of the Proton-M carrier rocket since the major accident that took place in May 2014. Launched from Baikonur, the Proton-M rocket burned up in the atmosphere above China, leaving Russia without its most powerful telecommunications satellite. The investigation concluded that the crash was caused by a failure of a turbo-pump bearing in the control engine of the rocket’s third stage.

The Proton-M is the largest carrier rocket in Russia’s fleet of space launch vehicles. Since its first launch in 2001, Proton has put dozens of Russian and foreign satellites into orbit. 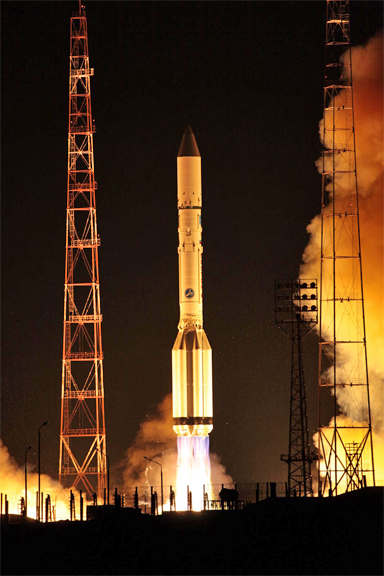 The launch of the Express-AM6 satellite.

On October 21, 2014, the Russian communications and broadcasting satellite Express-AM6 was launched into orbit. A Proton-M rocket booster took off from the Baikonur Cosmodrome (space launch facility) at 19.09 (Moscow time). The new Express-AM6 heavy-class space vehicle will be deployed into geostationary orbit at 53 degrees East, from where it will provide coverage of European Russia, the Urals and Western Siberia as well as the Middle East, Europe and Africa.

The Express-AM6 spacecraft was commissioned by the Russian Satellite Communications Company and built by Reshetnev ISS (Information Satellite Systems) of Russia in association with Canadian-based MDA and Russian NIIR (Radio Research and Development Institute). The satellite is based on the Express-2000 satellite platform and is equipped to carry 72 C-, Ku-, Ka- and L- bands transponders (bringing the combined capacity to more than 2,700 MHz). The vehicle service life is 15 years.

The Express-AM6 has been built for the domestic market outlook for satellite communications and broadcasting services as set out in the Federal Target Program 'Development of TV and Radio Broadcasting in the Russian Federation for 2009-2015' under the Federal Space Program of Russia until 2015. The satellite will provide additional infrastructure to make multi-program digital television and radio broadcasting services, including HD television, accessible to the Russia's western regions. The AM6 space vehicle is also designed to furnish mobile presidential and governmental communications, broadband Internet and multi-service access capabilities (digital TV, telephony, video conferencing and data transmission) as well as to set up VSAT communications networks in European Russia, the Urals and Western Siberia. Apart from that, the Express-AM6 satellite is proposed to be used for international projects to benefit Russian and foreign users in Africa, Europe and the Middle East.

The Express-AM6 satellite is expected to be commissioned at 53 degrees East in the first quarter of 2015, after completion of requisite flight tests and inspection of all on-board systems.

“It would not be much of an exaggeration to say that the launch of the Express-AM6 is the most anticipated event of the year in the satellite industry. With the new satellite in action, the overarching task of broadcasting nationwide television programs from Kaliningrad to Irkutsk will be addressed, - stressed General Director of RSCC Yuri Prokhorov. – The Express-AM6 has been built under the Federal Target Program 'Development of TV and Radio Broadcasting in Russia in 2009-2015'. The first satellite produced in the context of this Federal Target Program is Express-AM5 and it has been servicing the consumer needs in the Far East and Siberia since April 2014. Another two spacecraft – Express-AM7 and AM8 - are expected to be launched in the first quarter of the next year. Thus, continuous high-quality broadcasting service will be secured for the first, second and subsequent federal multiplexes throughout Russia”.

The Russian Satellite Communication Company (RSCC) is the Russian state satellite operator whose spacecraft provide a global coverage. RSCC was founded in 1967 and belongs to the ten largest world satellite operators in terms of satellites and orbital slots. The company possesses the largest satellite constellation in Russia. Satellites located in the orbital arc from 14 West to 145 East and cover the whole territory of Russia, the CIS, Europe, the Middle East, Africa, the Asia Pacific region, North and South America, and Australia.