With the release of 2012 financials for the “Big Four” FSS satellite operators, NSR views this as the .opportune time to examine each operator’s standings in one of the key financial metrics from its Satellite Operator Financial Analysis 2nd Edition study. The table and chart below illustrate the current as well as historical data for each operator’s Net Debt to EBITDA ratios. This ratio is one of the typical financial metrics used by credit agencies in determining the investment grade rankings for companies.

Standard & Poor's Ratings Services gives an investment rating of “BBB” and higher (up to the famous “triple A”) for companies that it considers “investment grade”, while companies rated at “BB” and lower are considered non-investment grade (or “high yield/junk” grade). In the 2006 to 2011 period, the average Net Debt to EBITDA ratio for the S&P 500 companies ranged from about 2.6 in 2006 to about 1.2 in 2011, illustrating that many S&P 500 companies have undergone a major deleveraging exercise during the period of financial uncertainty over the last few years.

It should not be seen as abnormal for all satellite operators to tend to have relatively high Net Debt to EBITDA ratios given the very large capital outlays entailed by the manufacture and launch of satellites. The ratings agencies generally recognize this issue and, more to the point, it is offset by the very high EBIDTA margins that are characteristic of the FSS sector.

And how do the FSS operators stack up? Both Eutelsat and SES have had Net Debt to EBITDA ratios over the last six years that tend to fall above the S&P 500 average, yet they still have maintained the coveted “investment grade” ranking from the major ratings agencies.

Turning to Telesat, it can clearly be seen that the operator undertook a major deleveraging effort since 2008 in the lead up to its attempt to sell itself. This was driven both by a major cost cutting effort as well as a strong push to increase revenues. Yet, when no buyer came forward, Telesat cashed in with a US$705 million recapitalization as part of a new US$2.55 billion credit facility undertaken in early 2012. This pushed up Telesat’s Net Debt to Adj. EBITDA ratio for the end of 2012. However, it is NSR’s view that Telesat will seek to quickly push this down again as it likely prepares itself for another sale attempt in the 2013 to 2014 period.

Finally moving to Intelsat, it can be seen that the company has by far the highest Net Debt to Adj. EBITDA ratio, and this is reflected in the “high yield” grading assigned to it by the rating agencies. Still, Intelsat’s high debt has fortunately not stopped it from investing in new satellite initiatives and its fleet renewal efforts. It is NSR’s view that the current Intelsat ownership is seeking to demonstrate a “revenue growth story” that will underpin the company’s hoped for IPO. Plus Intelsat has put a focus on cost cutting, as illustrated by the recent sale of its well known Washington, DC headquarters. It has also been reported that Intelsat will seek to pay down some of its debt with part of recent insurance proceeds totaling some US$488 million it expects to receive in early 2013 due to the loss of its IS-27 satellite and solar array issues on IS-19. NSR estimates that if all other things are held equal, Intelsat’s Net Debt to Adj. EBITDA ratio could be pushed down to 7.55 were the entirety of the insurance monies used to pay off debt; though this will not be the case since Intelsat has already announced its intention to launch a replacement, albeit lower cost version, for IS-27. 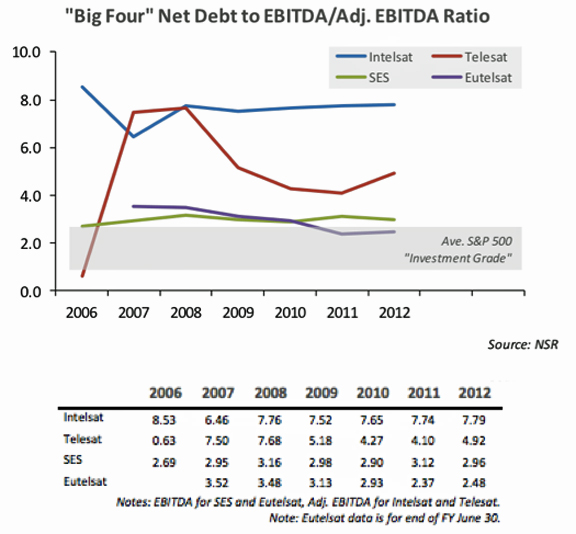 “There are but two ways of paying debt: Increase of industry in raising income, increase of thrift in laying out.”-Thomas Carlyle

The 19th century Scottish philosopher and writer probably best sums up the position of Intelsat and Telesat in terms of their large debt loads. To date, Telesat has been more successful in following Carlyle’s advice. As for Intelsat, it is NSR’s view that they will need to begin to imitate Telesat a little more closely if their IPO is ever to become a reality. Of course, the other way to get out from under a large debt is to never get into the situation in the first place as Eutelsat and SES often like to point out. Still, the situation today is what it is, and the best any company can do is move forward from where it is today and not wish that yesterday had been different.