OHB is reporting that the four satellites for the Galileo European navigation system have reached their target orbit in space as of 23:31 hours (CET) yesterday, after a transit time of just under four hours — the satellites are now orbiting the Earth at a distance of some 23,000 kilometers. 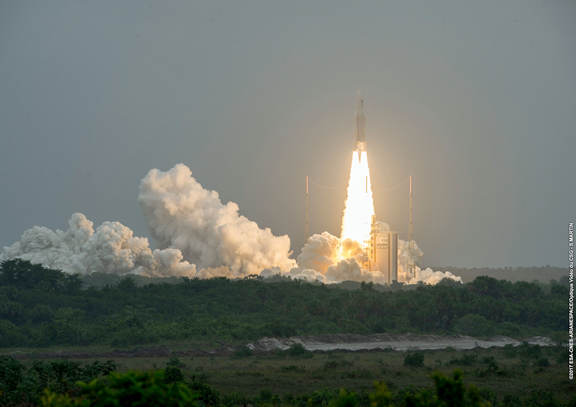 Photo is courtesy of, and copyright to, ESA-CNES-Arianespace.

The satellites will now enter a test phase lasting around six months. For the first 11 days, they will be managed by the control center of the French space agency CNES in Toulouse before being handed over to the Galileo control center in Oberpfaffenhofen.

This brings to 22 the total number of Galileo satellites currently in space. Of these, 18 have been developed, built and tested by OHB. A further four FOC*-satellites are scheduled for launching in July 2018. This will mark the completion of the first two batches.

In autumn 2018, work is to commence in OHB’s clean rooms in Bremen on the construction of the satellites under the contract for the third batch. OHB will be building a further twelve Galileo satellites by 2020. The services provided by the Galileo European satellite navigation system over and above the improved classic navigation services for the general public include a search and rescue service, the provision of positioning data for fleet and shipment management, certified time stamps for secure and authenticated financial transactions and powerful connections between devices in the Internet of Things (IoT). Moreover, Europe will be gaining additional independence thanks to its own navigation system. ” says Dr. Czech.

“Immediately after being released into orbit, our four satellites activated their systems, unfolded their solar panels and aligned themselves towards the sun. This was followed by preliminary testing,” said Dr. Manuel Czech, Galileo project manager at OHB, and he added, “OHB is proud to be making a decisive contribution to this with our navigation satellites."