NOAA’s fleet of satellites played a vital role in the rescues of 195 people during life-threatening situations throughout the United States and its surrounding waters in 2009. In each incident, NOAA satellites pinpointed these downed pilots, shipwrecked mariners, or stranded hikers by detecting a distress signal from an emergency beacon and relaying the information to first responders on the ground.

NOAA’s polar-orbiting and geostationary satellites, along with Russia’s Cospas spacecraft, are part of the international Search and Rescue Satellite Aided Tracking system, called COSPAS-SARSAT. This system uses a network of satellites to quickly detect and locate distress signals from emergency beacons onboard aircraft and boats, and from smaller, handheld personal locator beacons. “NOAA satellite weather and ocean data help us detect changes in weather and climate which is critically important to our everyday lives and economy,” said Mary E. Kizca, assistant administrator for NOAA’s Satellite and Information Service. “It’s a little known fact that these valuable instruments also made the difference between life and death for 195 people last year.” 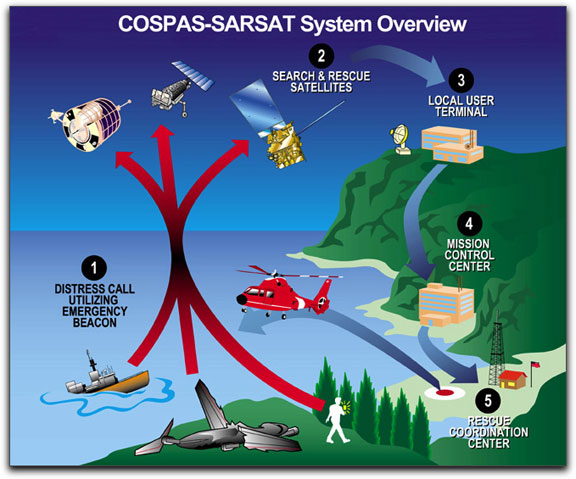 When a NOAA satellite finds the location of a distress signal within the United States or its surrounding waters, the information is relayed to the SARSAT Mission Control Center based at NOAA’s Satellite Operations Facility in Suitland, Md. From there, it is sent to a Rescue Coordination Center, operated by either the U.S. Air Force, for land rescues, or the U.S. Coast Guard, for water rescues. Now in its 28th year, COSPAS-SARSAT has been credited with supporting more than 27,000 rescues worldwide, including 6,232 in the United States and its surrounding waters. “With each rescue, the system performs the way it was intended – as a real life-saving network,” said Chris O’Connors, program manager for NOAA SARSAT.