Technicians have completed construction on the spacecraft capsule structure that will return astronauts to the Moon and have successfully shipped the capsule to Florida for final assembly into a full spacecraft.

The capsule structure, or pressure vessel, for NASA’s Orion Exploration Mission-2 (EM-2) spacecraft was welded together over the last seven months by Lockheed Martin (NYSE: LMT) technicians and engineers at the NASA Michoud Assembly Facility near New Orleans. Orion is the world’s only exploration-class spaceship, and the EM-2 mission will be its first flight with astronauts on board, taking them farther into the solar system than ever before. 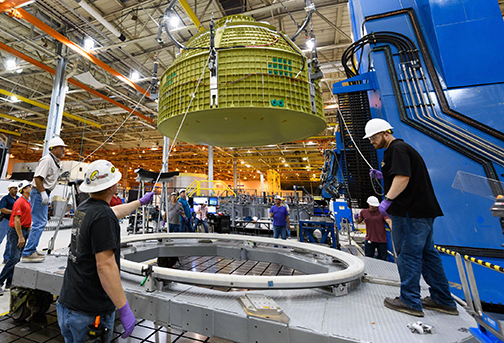 At the NASA Michoud Assembly Facility in Louisiana, Lockheed Martin technicians have completed construction of the first Orion capsule structure that will carry humans to deep space on Exploration Mission-2.  Image courtesy of NASA.

Orion’s pressure vessel is made from seven large, machined aluminum alloy pieces that are welded together to produce a strong, light-weight, air-tight capsule. It was designed specifically to withstand the harsh and demanding environment of deep space travel while keeping the crew safe and productive.

Mike Hawes, Lockheed Martin VP and Program Manager for Orion, said that it’s great to see the EM-2 capsule arrive just as the company is completing the final assembly of the EM-1 crew module. Lockheed Martin has learned a lot building the previous pressure vessels and spacecraft and the EM-2 spacecraft will be the most capable, cost-effective and efficient one the company has built.

Matt Wallo, Senior Manager of Lockheed Martin Orion Production at Michoud added that the company is taking extra care with this build and assembly, knowing that this spaceship is going to take astronauts back to the Moon for the first time in four decades. It’s amazing to think that, one day soon, the crew will watch the sun rise over the lunar horizon through the windows of this pressure vessel.