Next Trip To ISS By Shuttle... November 16th, Hopefully!

NASA's space shuttle Atlantis is targeted to start an 11-day flight to the International Space Station with a November 16th launch from the Kennedy Space Center in Florida, set for for 2:28 p.m. EST. Atlantis' launch date was announced Thursday at the conclusion of a flight readiness review at Kennedy. During the meeting, senior NASA and contractor managers assessed the risks associated with the mission and determined the shuttle's equipment, support systems, and procedures are ready.

The November 16th target date depends on the planned November 14th launch of an Atlas V rocket from nearby Cape Canaveral Air Force Station. The Atlas has reserved the Eastern Range on November 14th and 15th. If the Atlas launch is delayed to November 15th, the shuttle's liftoff will move to no earlier than 2:02 p.m. on November 17th. The STS-129 mission will focus on storing spare hardware on the exterior of the space station. The flight will include three spacewalks and install two platforms on the station's truss, or backbone. The platforms will hold spare parts to sustain station operations after the shuttle fleet is retired. 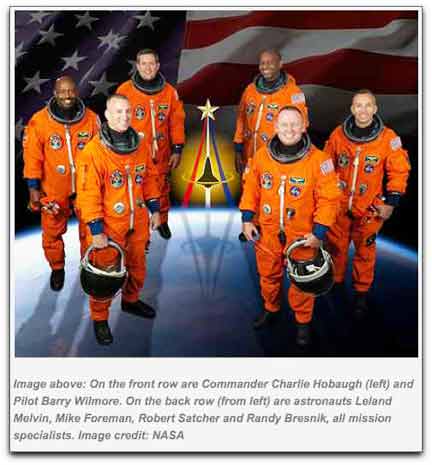 Commander Charlie Hobaugh and his crew of five astronauts are scheduled to arrive at Kennedy on Thursday, November 12th, for final launch preparations. Joining Archambault on STS-129 will be Pilot Barry Wilmore and Mission Specialists Leland Melvin, Randy Bresnik, Mike Foreman and Bobby Satcher. Nicole Stott, an astronaut who currently resides on the station, will return home with the Atlantis crew after living in space for more than two months. Her return on the shuttle is slated to be the final time it is used to rotate space station crew members.