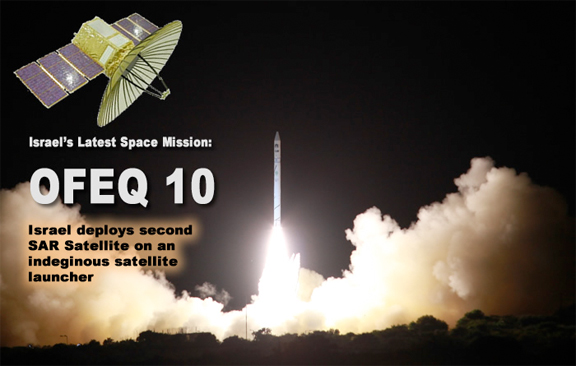 A Shavit satellite launcher lifts off from the Palmachim test range south of Tel Aviv on April 9, 2014, carrying the OFEQ 10 satellite, the eighth satellite in the OFEQ family, built by IAI's MBT Space division.

Photo is courtesy of IMOD.

The satellite, called Ofeq 10, was carried into space by a Shavit (comet) type launcher. Ofeq 10 is an Earth observing remote-sensing satellite that employs synthetic aperture radar (SAR) technology with advanced "high- resolution" imagery" that is capable of operating day or night and in all weather conditions."

Israel's defence ministry cooperated with Israel Aerospace Industries (IAI) and other Israeli high-tech companies in the development and production of Ofeq 10 and the Shavit satellite launcher. The launch, according to Israeli media, was jointly carried out by the ministry and the IAI at the Palmahim air base in central Israel. Israel maintains an extensive spy satellite program and invests hundreds of millions of shekels a year in space development and satellite industry.