[SatNews] The UK Space Agency has opened the payload competition for its United Kingdom Universal Bus Experiment (UKube1), a one year pilot mission in which the UK will launch a miniature satellite that will carry up to three different payloads into space, testing new technologies and carrying out new space research quickly and efficiently. 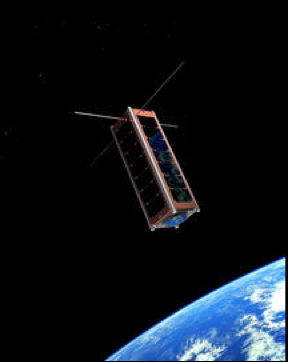 Artistic rendition of UKube1, courtesy of Clyde Space
UKube1 is an exciting and novel collaboration between the UK Space Agency, industry, and academia, and is envisaged as the pilot for a full national CubeSat program. The low cost, largely off-the-shelf nature and rapid turnaround of CubeSat missions means that they can be used to drive the development of innovative technologies and to promote economic growth. Only this week,the UK Space Agency announced that the UK space industry has grown by about 10 percent a year through the recession to reach an annual turnover of 7.5B pounds.

The funding partners for UKube1 are the UK Space Agency, TSB and STFC. The spacecraft is being developed through an existing Knowledge Transfer Partnership (KTP) with Scottish space company Clyde Space and the University of Strathclyde. The platform development is supported through internal funding from ClydeSpace and STFC sponsorship of the KTP. The UK's largest space company, EADS Astrium Ltd, is providing engineering and programme management support to the Agency for the programme.

Link to Clyde Space homepage.
Craig Clark, CEO of Clyde Space, said, "Clyde Space is delighted to be part of the UKube1 programme. UKube1 is a fantastic opportunity for innovative UK companies to get together with likeminded UK academics and be creative in space. The UK Space industry has recently set out ambitious growth plans and innovation is going to be key to achieving those ambitions. CubeSats provide an ideal platform to prove our new ideas in space, quickly and at a fraction of the cost of typical space missions. I think that UKube1 also demonstrates the willingness of the new UK Space Agency to recognise market trends and act on this knowledge to help UK companies operate at the forefront of these markets."

Launch of UKube1 is planned for December 1, 2011. Up to three payloads from UK based providers will be selected for flight, with at least one back up which itself will be flown on a following UKube, on approval of the full national program. A number of existing CubeSat missions, operated by other countries, are targeted at science applications and especially at studies that can be carried out at low-Earth orbits such as space weather studies, atmospheric science, energetic particle studies and spacecraft damage studies. Examples include NASA's GeneSat-1, a 5 kilogram CubeSat which is carrying bacteria inside a miniature laboratory and NASA's Firefly mission which is studying the relationship between lightning and mysterious bright flashes of gamma radiation in the upper atmosphere of our planet. The low-Earth orbit of CubeSats is also ideal for disaster monitoring and Earth sciences, as the lower a satellite orbits, the less time it takes to complete a revolution of the Earth. Constellations of Earth-monitoring CubeSats could be set up far more cheaply than regular satellite constellations and could be used for all kinds of applications, including bush-fire early warning, live maps and Tsunami warning. CubeSats also lend themselves well to education and offer great opportunities for hands-on training of the next generation of our space workforce. The mission is a fast program of 12 months duration in total, which will prove the collaborative UKube program concept by launching a three unit (10cm x 10cm x 34cm) CubeSat.

UK-based entities are invited to submit a proposal for a payload slot on this pilot mission. Initial Expressions of Interest (300 words including brief payload description) are required by Wednesday, November 24 , with full (10 page) proposals to be submitted by Wednesday December 8th. The payloads must be ready for flight within six months from payload kick-off. However, only the Flight Model of the payload will be required from each provider. Payload candidates who wish to develop their payload with support from an HEI and who are eligible can apply for short Knowledge Transfer Partnerships (KTP) specifically identified for this program. Further details will be provided in the Announcement of Opportunity. Payload providers must provide their own funding if KTP is not suitable.