[SatNews] ORBCOMM Inc. (Nasdaq: ORBC) will launch six next generation OG2 satellites from Cape Canaveral Air Force Base in Florida aboard a dedicated SpaceX Falcon 9 rocket, with liftoff scheduled for the morning of May 10, 2014. 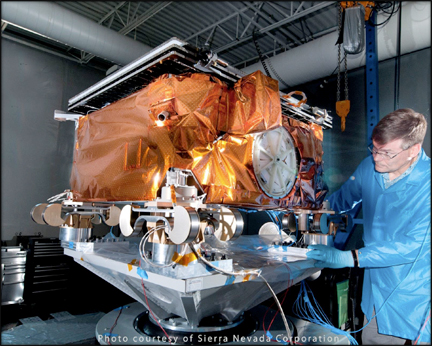 An ORBCOMM OG2 satellite during its build process.
Photo is courtesy of Sierra Nevada Corporation.

ORBCOMM’s OG2 satellites are far more advanced than its current OG1 satellites and will provide existing customers with significant enhancements, such as faster message delivery, larger message sizes and better coverage at higher latitudes, while drastically increasing network capacity. In addition, the OG2 satellites are equipped with an Automatic Identification System (AIS) payload to receive and report transmissions from AIS-equipped vessels for ship tracking and other maritime navigational and safety efforts, increasing asset visibility and the probability of detection for ORBCOMM’s AIS customers.

“Launching our first OG2 mission is an important milestone in advancing our global satellite network to a higher level of performance, coverage and efficiency,” said Marc Eisenberg, ORBCOMM’s Chief Executive Officer. “Our customers are looking forward to our new constellation, which will enhance their M2M applications, as well as new partnerships in the multiple additional markets for which OG2 is well suited.”

ORBCOMM anticipates launching the remaining eleven OG2 satellites and enhanced OG2 services in the fourth quarter of 2014 to complete its next generation constellation.

The May issue of SatMagazine will feature an Executive Spotlight of Mr. Eisenberg.