...gamers to take on the role of a space communications network manager and puts them in charge of building a communications network to support scientific missions. The educational application, "Space Communications and Navigation: NetworKing," was developed at NASA's Ames Research Center in Moffett Field, California, for the iPad and iPhone. NetworKing provides an interactive, 3-D experience with an insider's perspective into how mission controllers and scientists communicate with spacecraft and satellites using the space, deep space and near Earth networks.

"This game introduces the complex world of space communications to gamers," said Barbara Adde, policy and strategic communications director for the Space Communications and Navigation Division at NASA Headquarters in Washington. "It gives players the opportunity to enjoy a challenging game while absorbing the basic concepts of space communications. The game provides an engaging way to increase interest in the areas of science, technology, engineering and mathematics and opens minds to potential careers in these fields."

NetworKing allows players to build increasingly large and complex communication networks to support client satellites conducting scientific missions. Players who upgrade their communication networks can acquire more complex clients, such as the International Space Station and NASA's Hubble and Kepler space telescopes. By providing insight into the complex world of communications between astronauts, mission controllers, scientists and satellites in real mission scenarios, the game is not only challenging, but also entertaining.

In addition to the mobile application, NetworKing also is available free on the NASA 3-D Resources website. Players can access the game on their web browsers or it can be downloaded and run on PC or Macintosh operating systems. For links to download the app, download the game or play in a web browser, visit: http://go.nasa.gov/OFkcot. 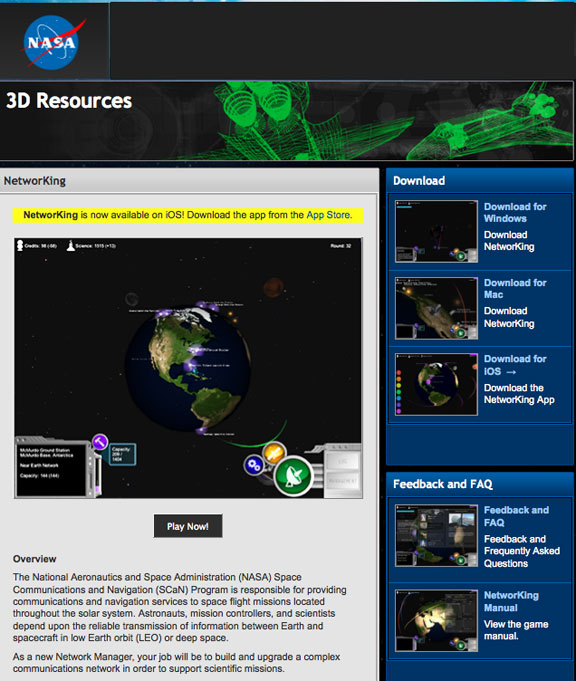