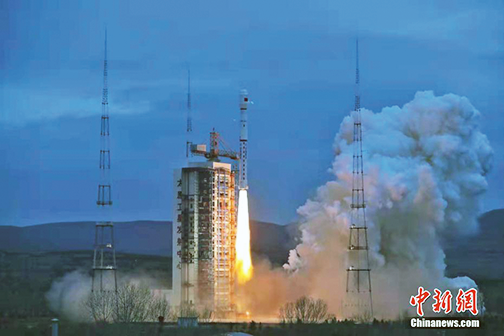 The launch of the Haiyang-2B satellite by China.

China has launched a Haiyang-2B ocean observation satellite into SSO from the Taiyuan Satellite Launch Centre on Thursday, October 25, via a Long March 4B rocket.

The Long March 4B lifted off at 6:57 Beijing time (22:57 UTC, 18:57 Eastern Wednesday), with the main contractor for the Chinese space program confirming launch success shortly after. This mission was China's 29th launch of the year, which surpasses a national annual launch record of 22 in number.

Haiyang-2B will operate from a 973 km. SSO altitude and return real-time marine data, including ocean levels, wind speeds and sea surface temperatures across a design lifetime of five years.

The satellite had a mass of around 1,500 kg. at launch and is carrying a range of instruments that include a radar altimeter for ocean topography and other measurements, a Doppler orbitography and Radiopositioning Integrated by Satellite (DORIS) for space geodesy and positioning, a laser reflector array, a microwave radiometer and a scatterometer.