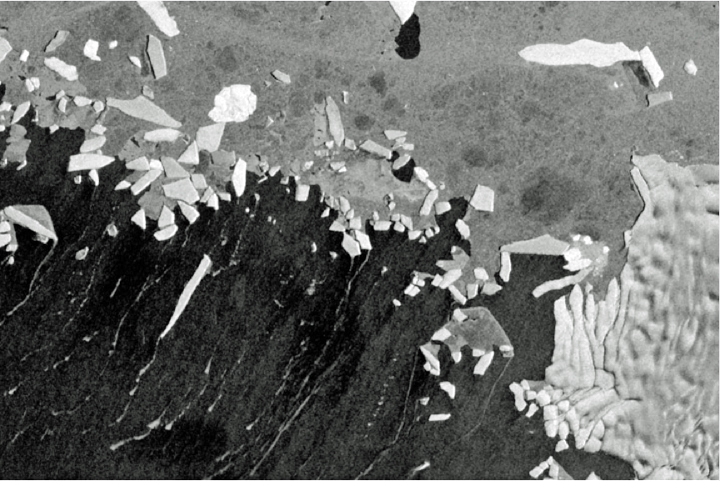 [SatNews] In the image to the right, bright icebergs spread across Pine Island Bay, resembling shards of broken glass—the bergs appear to be crumbling off Thwaites Glacier, a small part of which is visible on the right edge of the image. Thwaites and its neighbor, Pine Island Glacier, are the fastest-moving glaciers in Antarctica.

The image is among the first from the European Space Agency’s Sentinel-1A satellite, which launched on April 3, 2014. The satellite acquired the image on April 13, before the satellite reached its final operational orbit.

Sentinel-1A carries an advanced synthetic aperture radar (SAR) instrument, making it especially well-suited for measuring ice. Unlike passive instruments that simply record reflected or emitted energy, SAR instruments actively send microwaves to Earth’s surface and then measure the waves that are reflected back. Because such instruments don’t need light, SAR can acquire images at night or in the dark polar winter. Microwaves pierce clouds, so SAR can image the ground even on a cloudy day.

Differences in color in this image are an indication of how well each surface reflects microwave energy. “Radar signals are sensitive to surface roughness, salinity, and air bubbles in the ice,” says NASA scientist Walt Meier. Sea ice contains bits of salty water (brine), which scatters the microwave energy enough that little gets back to the satellite. As a result, sea ice is dark. Glacial ice—and the icebergs that come from it—is made of compacted snow. Air bubbles trapped in the ice reflect microwave energy extremely well, so more of the signal makes it back to the satellite and the ice appears bright. Water absorbs the radar signal, so it is black.

The reflected microwaves also show the structure of the ice surface. The glacier—essentially a densely packed river of ice—is bumpy and cracked. The sea ice is blotchy, with dark-colored thin patches and brighter veins of thicker ice. A brush of gray on the water hints at a very thin layer of ice forming as cooler autumn temperatures come to Antarctica.

Sentinel-1A is one of two SAR satellites the European Space Agency is adding to its fleet. The second Sentinel-1 satellite will orbit on the opposite side of the Earth so that the two satellites can image the entire Earth in six days. The satellites will be used to map sea ice and glacial ice, monitor the wind and waves on the ocean, and detect changes in the shape of the land. SAR instruments are useful for disaster mapping since they can see oil slicks on the ocean’s surface, floods through clouds, or the deformation of the ground after a landslide or earthquake.