GMV has successfully tested the satellite ground segment of the World Space Observatory Ultraviolet mission (WSO-UV). An international project led by the Russian Space Agency, ROSCOSMOS, with the participation of Spain, Germany, Ukraine and China, WSO-UV will fill the gap left by the Hubble telescope at the end of its mission, becoming the planet’s only ultraviolet astronomical observatory during its operation. 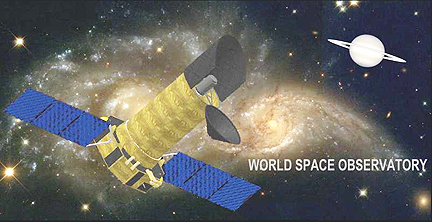 The first simultaneous demonstration of the coordinated telescope control operation was conducted on February 12 by the two observatories of the new space telescope—Universidad Complutense de Madrid (UCM) and the Astronomy Institute of the Russian Academy of Sciences—and GMV, leader of the industrial consortium developing the satellite ground segment.

Both scientific teams at the two locations worked simultaneously, posing a stiff liaison challenge. During the demonstration, held at the site of UCM’s control center in the University’s Statistics School (Escuela Universitaria de Estadística), both observatories successfully maintained a live connection, involving a check of the complete telescope operation chain for any observation. The tests were witnessed by all partners participating in the project: the Ministry of Industry, Tourism and Trade (Ministerio de Industria Turismo y Comercio), the Ministry of Science and Innovation (Ministerio de Ciencia e Innovación), the Universidad Complutense de Madrid, GMV, CSIC (Higher Council of Scientific Research) and INTA (National Spanish Aerospace Technology Institute). WSO-UV represents Spain’s heaviest investment in space astronomy together with the Russian Space Agency. Scientific responsibility for the project falls on the Universidad Complutense de Madrid. Spain is also providing one of the three observation instruments, the ultraviolet field camera unit ISSIS and is participating in the definition of the project’s central observation program, leading several research lines. Spain will also be assisting with the ground segment, developed by a GMV-led consortium, not only cooperating in the development of mission software and scientific-operation software, but also providing backup for these missions throughout the telescope’s useful life.

Spain’s participation in this large-scale, 10-year project showcases the strength and competence of its scientific team, which will be carrying out important work during the entire project. It is a very important project for Spain economically and because of the credibility it brings to the country.  The use of the Spanish technology propels Spain’s technological capacity onto a worldwide platform, thus demonstrating that Spain is an exporter of top-quality, high-level technology. The Hubble telescope, launched in 1990 and orbiting 593 kilometers above the Earth, has been kept going all these years by service missions sent out on space shuttles. Now that NASA has abolished these missions, its days could be numbered. The ultraviolet telescope, known as T-170M and currently being built in Russia, will orbit at a height of 42,164 kilometers above the earth, obviating any atmospheric interference. It will carry a 1.7-meter diameter mirror and will be fitted with specialist instruments for making various measurements. The telescope is expected to start producing scientific results months after orbit insertion.