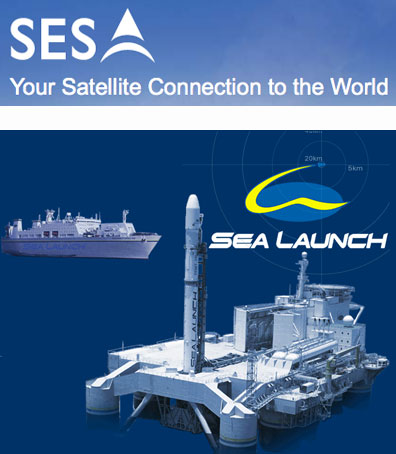 SES homepageSea Launch homepage
[SatNews] There's a possibility this Company may well start to launch some of their satellites from an ocean-based facility.

SES S.A., a leading worldwide satellite operator (Euronext Paris and Luxembourg Stock Exchange: SESG), and Sea Launch have announced that they have entered into a framework understanding regarding possible cooperation on the future launch of SES satellites on Sea Launch launch vehicles. Romain Bausch, CEO of SES, noted, “We have always considered the launch vehicle system provided by Sea Launch to be an important participant in the commercial arena of heavy-lift launch providers. Given our desire for a vibrant and competitive launch service market, we are pleased to see a new Sea Launch emerging and re-engaging.”

Under the framework understanding announced today, Sea Launch has agreed to provide SES with detailed technical information regarding its launch vehicle system on a regular basis. In turn, SES has agreed – based on the success of upcoming launch missions already on the Sea Launch manifest – to consider Sea Launch as an SES recognized provider for future launch missions. Kjell Karlsen, President of Sea Launch, stated, “We are excited to re-establish our relationship with SES. The understanding we have reached clearly reflects the confidence that SES has in the Sea Launch system and our ability to provide cost-effective, reliable launch services to the world’s most demanding customers.”

SES notes that Sea Launch has put in place an exceptional business team and a new credible structure backed by its affiliate, Energia Logistics Ltd, both key steps to moving its business forward. Bausch concluded, “We congratulate Sea Launch on their return to the launch service business, and we look forward to successful launches of SES satellites in the future.”