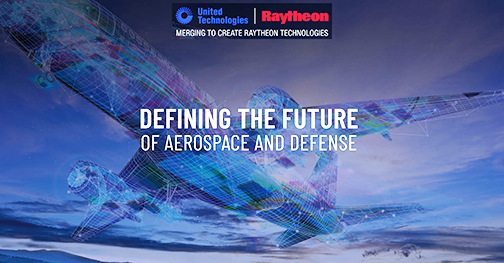 Raytheon Company (NYSE: RTN) and United Technologies Corp. (NYSE: UTX) have entered into an agreement to combine in an all-stock merger of equals.

The combined company, which will be named Raytheon Technologies Corporation, will offer expanded technology and R&D capabilities to deliver innovative and cost-effective solutions aligned with customer priorities and the national defense strategies of the U.S. and its allies and friends. The combination excludes Otis and Carrier, which are expected to be separated from United Technologies in the first half of 2020 as previously announced.

The combined company will have approximately $74 billion in pro forma 2019 sales. With a strong balance sheet and robust cash generation, Raytheon Technologies will enjoy enhanced resources and financial flexibility to support significant R&D and capital investment through business cycles.

The merger is expected to close in the first half of 2020, following completion by United Technologies of the previously announced separation of its Otis and Carrier businesses. The timing of the separation of Otis and Carrier is not expected to be affected by the proposed merger and remains on track for completion in the first half of 2020. The merger is intended to qualify as a tax-free reorganization for U.S. federal income tax purposes.

The merger establishes a broad and complementary portfolio of platform-agnostic capabilities across the high-growth segments of aerospace and defense, reducing risk of concentration in any individual platform or program.

With a combined annual company and customer funded R&D spend of approximately $8 billion, seven technology Centers of Excellence, and more than 60,000 engineers, the company will develop new, critical technologies faster and more efficiently than ever before. Areas of joint advancement include, but are not limited to: hypersonics and future missile systems; directed energy weapons; intelligence, surveillance, and reconnaissance (ISR) in contested environments; cyber protection for connected aircraft; next generation connected airspace; and advanced analytics and artificial intelligence for commercial aviation.

Robust free cash flow growth and a strong balance sheet will support continued investment and return of capital to shareowners. The combined company expects to return $18 to $20 billion of capital to shareowners in the first 36 months following completion of the merger. As a result of the combination, the company also expects to capture more than $1 billion in gross annual run-rate cost synergies by year four post-close, with approximately $500 million in annual savings returned to customers. In addition, the combination presents significant long-term revenue opportunities from technology synergies.

The combined company will have a strong performance-based culture focused on integrity, collaboration, innovation, diversity and corporate social responsibility. Employees will have expanded opportunities for career development and advancement in high-growth areas, as well as ongoing engagement in local communities.

Raytheon plans to consolidate its four businesses into two businesses to be named Intelligence, Space & Airborne Systems and Integrated Defense & Missile Systems. The new businesses will join Collins Aerospace and Pratt & Whitney to form the four businesses of Raytheon Technologies. Net debt for the combined company at the time of closing is expected to be approximately $26 billion, with United Technologies expected to contribute approximately $24 billion. The combined company targets an 'A' category credit rating at the time of the closing.

The combined company's Board of Directors will be comprised of 15 members, consisting of eight directors from United Technologies and seven from Raytheon, with the lead director from Raytheon. Tom Kennedy will be appointed Executive Chairman and Greg Hayes will be named CEO of Raytheon Technologies. Two years following the close of the transaction, Hayes will assume the role of Chairman and CEO.

Raytheon Technologies will be headquartered in the greater Boston metro area and will retain a corporate presence in existing locations. The company will be led by a highly experienced, proven leadership team with a strong track record of innovation, delivering on synergies, and meeting financial and customer commitments.

The transaction is subject to the satisfaction of customary closing conditions, including receipt of required regulatory approvals, the approval of Raytheon and United Technologies shareowners, as well as completion by United Technologies of the separation of its Otis and Carrier businesses.  As previously mentioned, the transaction is expected to close in the first half of 2020.

There is no change to either Raytheon's or United Technologies' financial outlook for 2019.

Tom Kennedy, Raytheon Chairman and CEO, said this is an exciting and transformational day for the companies, and one that brings tremendous opportunity for future successes. Raytheon Technologies will continue a legacy of innovation with an expanded aerospace and defense portfolio supported by the world's most dedicated workforce. With the enhanced capabilities, the company will deliver value to customers by anticipating and addressing their most complex challenges, while delivering significant value to shareowners.

Greg Hayes, United Technologies Chairman and CEO, added that the combination of United Technologies and Raytheon will define the future of aerospace and defense. The two companies have iconic brands that share a long history of innovation, customer focus and proven execution. By joining forces, the firms will have unsurpassed technology and expanded R&D capabilities that will allow investment through business cycles and address customers' highest priorities. Merging the companies' portfolios will also deliver cost and revenue synergies that will create long-term value for  customers and shareowners.