[SatNews] Arianespace is preparing for the busiest year of flight activity ever in 2012.... 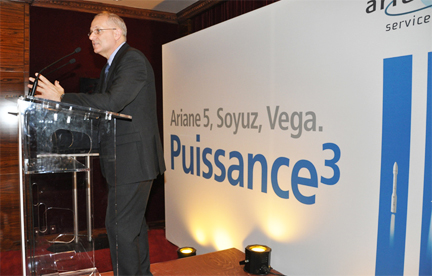 Arianespace Chairman & CEO Jean-Yves Le Gall briefs journalists at today’s press conference, with a backdrop carrying the Power3 – or “Power of Three” theme – in French. Photo courtesy of Arianespace.
....building on an industry leadership position that benefits from the operational synergy, availability and commercial advantages of its Ariane 5, Soyuz and Vega launcher family in side-by-side service from the Spaceport in French Guiana. Chairman & CEO Jean-Yves Le Gall said Arianespace’s 2012 planning is for seven Ariane 5 heavy-lift missions and three medium-lift Soyuz flights from the Spaceport, along with two Soyuz launches at Kazakhstan’s Baikonur Cosmodrome – to be complemented by the lightweight Vega’s introduction at French Guiana. This comes after a highly successful 2011 in which Arianespace lofted 29 payloads – including eight of the total 16 geostationary orbit satellites launched worldwide, while also winning 10 of the 21 commercial spacecraft contracts signed by all players in the launch services market. As a result, Arianespace logged total revenues estimated at 985 million euros for another anticipated break-even year, with the company’s order backlog reaching a new record of 4.5 billion euros.

Arianespace’s first Ariane 5 mission of 2012 from the Spaceport will carry the no. 3 Automated Transfer Vehicle entrusted to the company by the European Space Agency. Le Gall said the go-ahead for fueling of this large resupply vessel was given yesterday, and preparations for the heavy-lift launch to service the International Space Station are now in full swing for a liftoff on March 9.

The next Soyuz fight from French Guiana is targeted for this summer, carrying two more Galileo In-Orbit Validation satellites. It will be preceded by a Baikonur Cosmodrome Soyuz mission on May 23 that is to orbit Europe’s MetOp-B meteorological satellite.

During the 2011 activity, Arianespace “earned its stripes” as the industry’s most operational launch services provider, Le Gall stated. The company took full advantage of its growing launcher family and the capabilities of Arianespace mission teams to perform five Ariane 5 flights from the Spaceport, along with the two history-making inaugural missions of Soyuz from French Guiana – which were complemented by two Soyuz launches from Baikonur Cosmodrome conducted by its Starsem affiliate. The pace will continue in 2012, as Arianespace draws further advantages from the synergy of Ariane 5, Soyuz and Vega missions at the Spaceport, as reflected at Le Gall’s press briefing today by a backdrop with the Power3 – or “Power of Three” – theme. “Each launcher will benefit from the side-by-side operations of the other, which are backed by the reliability, availability, flexibility and responsiveness of Arianespace’s launch services offering,” Le Gall added. “Added to the capabilities of these truly world-changing launchers are Arianespace’s remarkable technical and operational teams that can develop – and carry out – the most sophisticated and complex missions.” Le Gall said Ariane 5 has earned its reputation as the “king of launchers,” with 46 consecutive successes during the past nine years – including the five launches performed in 2011. In commercial activities related to the Ariane 5 last year, Arianespace signed contracts for new 10 GTO satellite payloads, along with an order for one deep space planetary probe. “Arianespace today has an order backlog to fill 21 Ariane 5 launches – the largest ever for this vehicle,” he explained.

Soyuz continues its track record as the medium-lift launcher of reference, highlighted by the vehicle’s historic introduction at the Spaceport last year with two on-target flights performed in October and December, building on the 24 successful commercial missions performed from Baikonur Cosmodrome by the Starsem affiliate – including the two achieved in 2011.

Arianespace signed one new contract for Soyuz in 2011, bringing its backlog to 15 missions for this vehicle: 13 in operations at the Spaceport, plus two from Baikonur Cosmodrome. With Vega being readied for its maiden flight at the Spaceport, Arianespace signed two commercial contracts in 2011 for this new lightweight vehicle. They are in addition to the five VERTA (Vega research and technology accompaniment) missions to be performed by Arianespace for the European Space Agency.