NOAA officially deactivated its Geostationary Operational Environmental Satellite-10 today after 12 years of service. GOES-10 tracked some of the most memorable tropical cyclones in history, including Hurricane Mitch, which devastated parts of Central America in 1998; and Hurricane Katrina, which ravaged the Gulf Coast in 2005.

NOAA had anticipated the end of service for several months and began deactivating GOES-10 yesterday, when it fired the spacecraft’s booster moving the satellite into an orbit approximately 22,186 miles above the Earth. The agency finished its third, and final, firing of the booster, putting it safely out of commission. 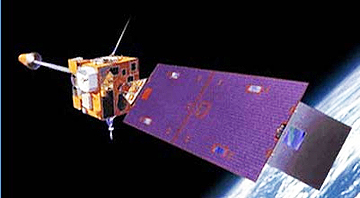 Launched in April 1997, GOES-10 was originally planned for a five-year mission. It was positioned as NOAA’s GOES-West satellite, more than 22,000 miles above the Earth’s surface. In 2006, a newer satellite, GOES-11, replaced GOES-10. NOAA then repositioned GOES-10 to support hurricane forecasting efforts in South America. NOAA anticipates moving GOES-12 to provide coverage for South America by May 2010.

Currently, NOAA has four GOES in space: GOES-11 and GOES-12, which are in operation; GOES-13, in orbital storage and slated to replace GOES-12 when it is repositioned; and GOES-14, which launched this spring and is undergoing post-launch tests. NOAA is planning the nexgen GOES-R series, set to begin launching in 2015. GOES-R is expected to double the clarity of today’s GOES imagery and provide at least 20 times more atmospheric observations than current capabilities.