[SatNews] The Central American Aeronautics and Space Administration (ACAE) has officially announced that the first Central American satellite, built in Costa Rica, will be launched into space in 2016. 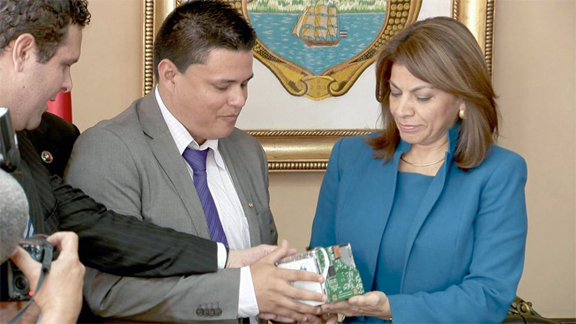 Representatives of the Central American Aeronautics and Space Administration and scientists from the Technological Institute of Costa Rica demonstrate a tiny picosatellite to Costa Rican President Laura Chinchilla.

The satellite will collect and relay daily data on carbon dioxide to evaluate the effects of climate change. That data will be sent to monitoring bases in tropical forests at the Santa Rosa National Park in Costa Rica’s northwestern province of Guanacaste. Information will then be broadcast to another base station at labs operated by the Technological Institute of Costa Rica (ITCR) for analysis and processing. The project was declared of public interest by an executive decree signed Monday by President Laura Chinchilla, who leaves office in May.

“The signing of this decree is an historic event for Costa Rica that will allow the country to position itself as an innovative nation. It is a message to the world that this country is still thinking big. This project will return our people the ability to dream,” ACAE President Carlos Alvarado said.

The device weighs less than 10 kilograms and technically is considered a miniature satellite, or picosatellite (pico). It was developed over three years with help from ITCR experts and two Tico scientists, former NASA astronaut Franklin Chang Díaz and NASA engineer Sandra Cauffman, who also is assistant director of the MAVEN project, a mission currently studying the atmosphere of Mars. The launch likely will take place outside of Costa Rica, which currently has no launch infrastructure.

“In order to launch the picosatellite, we could either hire a private service or sign a cooperation agreement with a space agency. We already have held conversations with South Korea and NASA,” Alvarado said.