[SatNews] The Space Foundation is now seeking nominations for induction into the prestigious Space Technology Hall of Fame(r) in 2011. The program honors innovations by organizations and individuals who transform space technology into commercial products that improve life on Earth.

The deadline for nominations is Tuesday, August 31, and anyone can submit a nomination of a technology that was developed for space and then modified or adopted for use on Earth. The Space Foundation, in cooperation with NASA, established the Space Technology Hall of Fame® in 1988 to increase public awareness of the benefits that result from space exploration programs and to encourage further innovation. Since that time, 63 technologies have been inducted. Inducted technologies include energy-saving technologies, life-saving medical devices, health improvement technologies, satellite and telecommunication technologies, and practical commercial devices. Some noteworthy examples are the automatic external defibrillator; non-invasive breast biopsy technology; MRI and CAT scan imaging; anti-shock garments; LASIK eye surgery; implantable pacemakers and hearing aids; and technologies that power cellular phones, terrestrial networks, and satellite broadcast television and radio communications. The 2010 inductees were lenses that protect human eyes from solar radiation, and digital fly-by-wire technology that significantly improves the fuel efficiency, reliability, and cost of modern aircraft. 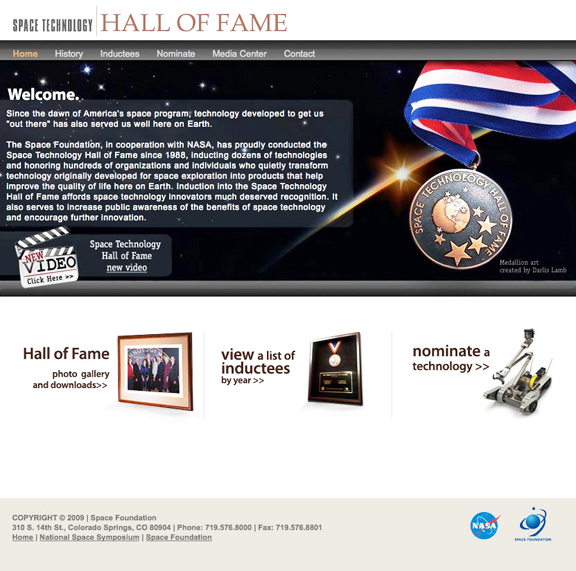 
Each nomination is reviewed for completeness, assessed by technical experts, and then ranked by a prestigious panel of judges who look at economic benefit, public awareness, societal benefit, longevity, and public/private/partnership investment. Award ceremonies for the 2011 inductees and honorees will be part of the 27th National Space Symposium, which will be held at The Broadmoor Hotel in Colorado Springs, Colo., April 11 - 14, 2011. Conducted by the Space Foundation, the Symposium is the premier annual gathering of the global space community.