Here's Looking @ Earth... Florida Is All Fired Up (Imagery)

[SatNews] A large fire in Osceola National Forest has burned more than 10,000 acres and sent smoke wafting across Northeast Florida.

The Moderate Resolution Imaging Spectroradiometer (MODIS) instrument on NASA’s Aqua satellite captured this view of the County Line Fire and its smoke on April 7, 2012. The thick and potentially hazardous plume of smoke was blowing west when the image was taken at 3:45 p.m. local time (08:45 Universal Time). Another view of the smoke—captured by a MODIS instrument on the Terra satellite a day later—showed that winds had shifted and the plume had drifted both south and north. 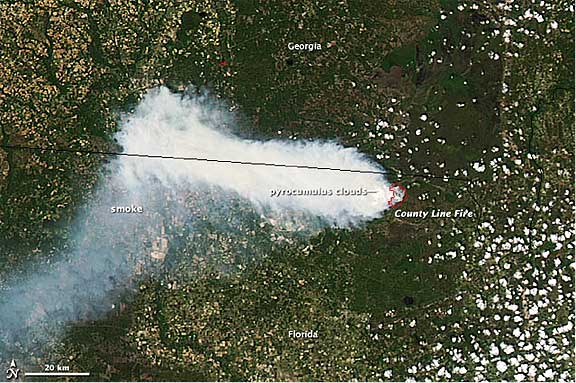 On April 9th, the National Weather Service warned Floridians that smoke would likely move east and affect the Jacksonville area, with visibility reduced to one mile (and possibly less than that) close to the wildfire. Just west of the fire, a number of pyrocumulus clouds are visible. Large fires can rapidly heat the air above a fire, and the heated air rises with smoke until water vapor in the atmosphere condenses into a puffy cloud. In satellite imagery, pyrocumulus clouds appear as patches of white capping otherwise dark columns of smoke.

In a wildfire season forecast, the Florida Forest Service pointed out that La Niña has had a significant drying impact in recent years; it has caused near-record warmth and unusually low levels of rainfall across the state. The forest service expects that temperature and rainfall will likely return to normal levels in the coming months as the effects of La Niña dissipate. Nonetheless, forecasters expect above-normal wildfire potential through the spring.