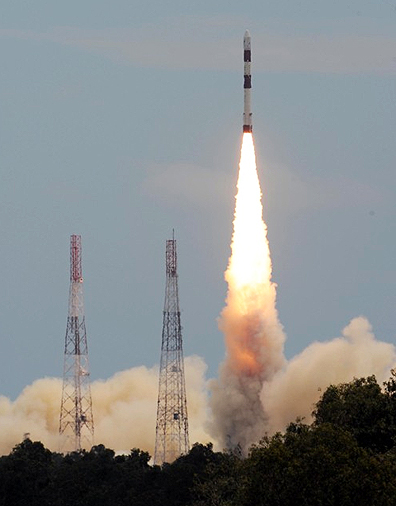 The ISRO launch of four satellites aboard the PSLV-C18 launch vehicle.
[SatNews] Four are off and away...

The Indian Space Research Organization (ISRO) used a strategic delay to avoid a possible encounter with space debris to ensure a perfect launch of PSLV-C18. Lifting off from the Sriharikota spaceport at 11.01 a.m., a minute after its designated time, the ISRO's workhorse Polar Satellite Launch Vehicle placed into orbit four satellites, including the Indo-French Megha-Tropiques. "The launch was a great success. We had targeted a circular orbit of 867km for the weather satellite Megha-Tropiques and we have achieved, as per initial reports, 865km," said ISRO chairman K. Radhakrishnan. "It demonstrates again the reliability and versatility of PSLV as a launch platform."

After the beginning a 50-hour countdown at 9:00 a.m. on Monday, ISRO learned of the space debris. Three hours before the schedule lift-off time, it found that the probability of collision remained high. "We delayed the launch by a minute since there was a higher probability of the launch vehicle hitting space debris at an altitude between 600km and 800km," an ISRO official said. One minute is a significant amount of time in this context, as any object in space at that height moves at about 8km per second. The delay ensured that the rocket reached the altitude after the debris had moved away by about 500km and the satellites could be safely ejected into the orbit.

The 1,000kg Megha-Tropiques, placed in orbit 22.5 minutes after the rocket lifted off, was jointly developed by ISRO and the French national space agency CNES. It will study the water cycle and energy exchanges in the tropics. Its circular orbit is inclined at 20 degrees to the equator allowing it to cover more area on both sides of the equator. The other satellites aboard PSLV-C18 are the 28.7kg VesselSat-1 of Luxembourg, 3kg Jugnu of IIT Kanpur and the 10.9kg SRMSat of SRM University in Chennai. While Jugnu will take images of the Earth in the near-infrared region, SRMSat will try to address the problem of global warming and pollution by monitoring carbon-dioxide and water vapour levels.

While Isro and CNES spent almost Rs 86 crore each on Megha-Tropiques, PSLV-C18, used in a "core-alone" configuration, cost Rs 90 crore. Commenting on the increasing frequency of launches, Radhakrishnan said a feasibility study was on to identify another launch site which would be part of the 12th five year Plan. "In the meantime, we will build another launch vehicle assembly plant near the second launch pad to increase the frequency of launches," he said. Another ISRO official indicated that a new assembly plant may require as much as five years to complete, provided work starts now. (Source: The Times Of India, Ishan Srivastava) 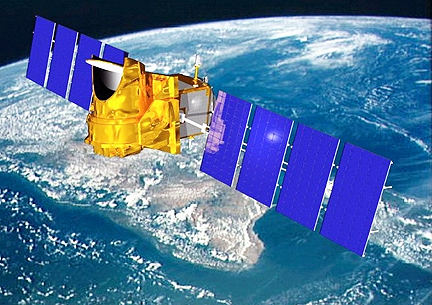 Artistic rendition of the Megha-Tropiques satellite