[SatNews] NASA's Fast, Affordable, Science and Technology Satellite, or FASTSAT, will share a ride to space with three other satellites on Nov. 19. 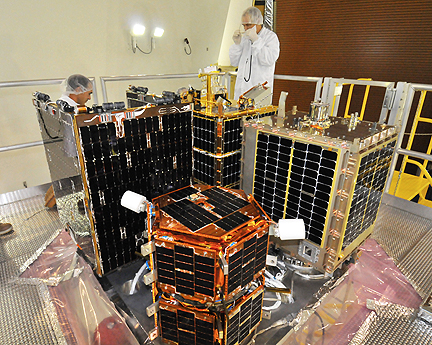 Four satellites sit atop the Minotaur IV launch vehicle
that will launch them to space Nov. 19 on the
Space Test Program S26 mission.
(Lou Hernandez/Air Force Space & Missile Systems Center)
The satellites will be launched on the Air Force Space Test Program's (STP) upcoming mission, STP-S26, which will launch from the Alaska Aerospace Corporation's Kodiak Launch Complex on Kodiak Island, Alaska. Earlier this month, FASTSAT and three other secondary payload satellites were mated to the multi-payload adapter atop the Minotaur IV launch vehicle in preparation for launch.

FASTSAT is NASA's first microsatellite designed to create a capability that increases opportunities for secondary, scientific and technology payloads, or rideshares, to be flown at lower cost than previously possible. The overall objective of the FASTSAT mission is to demonstrate the capability to build, design and test a microsatellite platform to enable governmental, academic and industry researchers to conduct low-cost scientific and technology experiments on an autonomous satellite in space.