Russia... Enroute To ISS + Another Unmanned Spacecraft In The Works 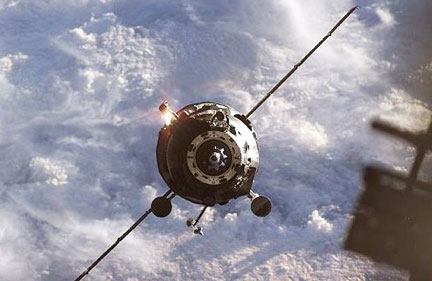 It was launched from the Baikonur space center in Kazakhstan on a Soyuz-U booster rocket. It separated 10 minutes later and successfully entered the designated orbit. The space freighter will deliver fuel, oxygen, food, books and birthday presents for Expedition 26 Captain Scott J. Kelly of the United States, who turns 47 on February 21. The spaceship is to dock with the space station on January 30 at 5:40 Moscow time [2:40 GMT]. Preparations have already been made for the module's arrival. Last year on December 22, Russia's Mission Control readjusted the ISS orbit, raising it by 4.2 kilometers (2.6 miles) to ensure the best conditions for the docking of the Progress M-09M freighter and the U.S. Discovery shuttle. Earlier in the week Russia's Progress M-08M cargo spacecraft was undocked from the ISS and was sunk in a remote area of the southern Pacific Ocean. Progress-family freighters have been the backbone of the Russian space cargo fleet for decades. In addition to their main mission as cargo spacecraft, they are used to adjust the ISS's orbit and conduct scientific experiments.

Russian researchers are working on an unmanned spacecraft similar to the U.S. Boeing X-37 Orbital Test Vehicle, Space Troops chief Oleg Ostapenko said on Thursday. He said, however, it was not clear as yet how it would be used. "Something has been done along these lines, but as to whether we will use it, only time will tell," Ostapenko said. The Boeing X-37, used for orbital spaceflight missions, has a length of over 29 ft (8.9 m) and features two angled tail fins. The spaceplane's first orbital mission was launched on April 22, 2010 with an Atlas V rocket. (Source RIA Novosti)