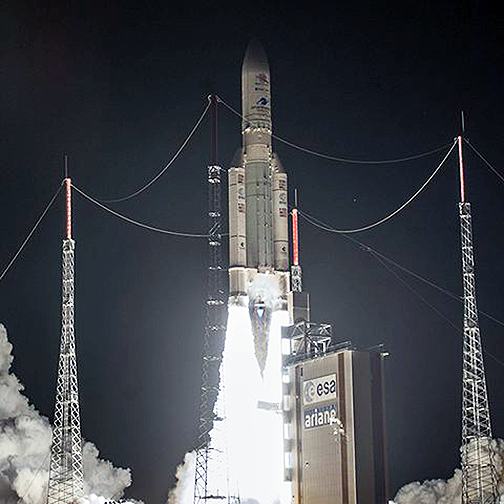 Ascending from the Spaceport’s ELA-3 launch complex at 10:45:28 p.m. local time in French Guiana — the planned precise moment of liftoff — Ariane 5 lofted its passenger during a flight lasting just under 27 minutes, with the multi-segment BepiColombo spacecraft deployed into an Earth escape orbit.

As the nearest planet to the Sun, exploring Mercury is key to acquiring knowledge of how terrestrial planets originate and evolve, as well as to understand how conditions supporting life arose in the solar system, and possibly elsewhere. Mercury also is known as the “Swift Planet” because its orbital period around the Sun of 87.97 days is the shortest of all the planets in the solar system.

The BepiColombo mission is being carried out jointly by the European Space Agency (ESA) and the Japan Aerospace Exploration Agency (JAXA). After arriving in late 2025, the spacecraft — built under the industrial leadership of Airbus — will examine the peculiarities of Mercury’s internal structure and magnetic field generation, as well as how the planet interacts with the sun and solar wind. 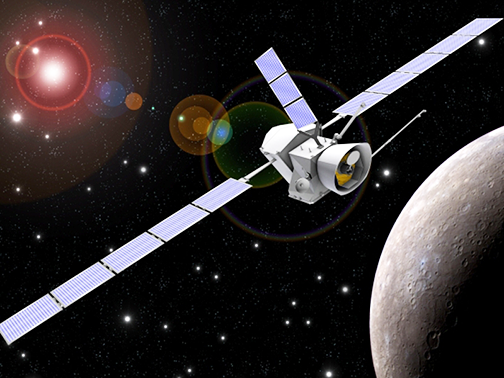 Artistic rendition of the BepiColombo spacecraft.

Image is courtesy of CNES.

BepiColombo is scheduled for a one-year nominal mission at Mercury, with the possibility for a one-year extension. It was named after Italian mathematician and engineer Giuseppe “Bepi” Colombo, who was known for his work related to Mercury.

BepiColombo is the 51st mission (and 73rd spacecraft) launched by Arianespace for ESA and is also the 121st Airbus-produced spacecraft lofted by Arianespace, which has a backlog of 22 additional satellites to orbit for this manufacturer on future flights.

At the completion of the BepiColombo mission, Arianespace’s Stéphane Israël announced early November as the timing for the company’s next flight, which will use a Soyuz launcher to orbit Europe’s Metop-C polar-orbiting meteorological satellite for the EUMETSAT satellite agency.

Airbus Defense and Space added the following regarding the launch...

The BepiColombo satellite built by Airbus for the European Space Agency (ESA) and Japanese Space Agency (JAXA) has embarked on the spacecraft’s long journey of some 8.5 billion kilometres through the inner solar system, reaching our solar system’s innermost planet in seven years. 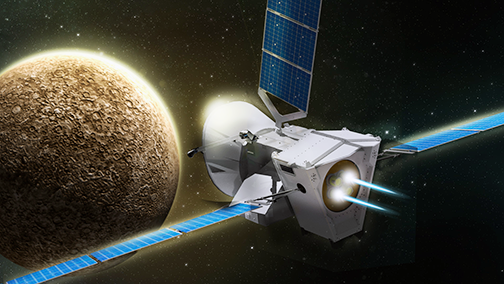 After arrival in 2025, for the first time two space probes will simultaneously observe Mercury and the planet’s environment. Plans include using cameras to map the planet’s surface more precisely than ever before. Data collected from 16 scientific instruments will provide insights into the geological and chemical composition of the planet, along with its structure, the characteristics of its magnetic field and how it interacts with the solar wind.

“This very complex mission is the result of a truly inspiring international cooperation among 83 companies from 16 European countries and Japan”, said Nicolas Chamussy, Head of Space Systems. “This international effort, with Airbus teams from five countries, is the natural consequence of humanity’s desire to discover more about this little known planet and the origins of our solar system. All great missions come with challenges: Airbus had to develop sophisticated thermal control solutions and even “special” solar arrays, capable of tilting 75 degrees away from the Sun to limit the temperature. Now its challenge is to complete the journey safely and deliver the science we’re all waiting for.”

The Ariane 5 launched ‘Bepi’ into space at ‘escape velocity’ — the speed required for an object to break free of the Earth’s gravitational pull. This will allow the space probe to enter a solar orbit similar to that of the Earth at speeds of around 120,000 km/h.

During its journey to Mercury, BepiColombo will make several braking maneuvers to adjust its orbit, allowing it to make a slow approach towards the planet. In order to achieve this, the control center — the European Space Operations Centre (ESOC) in Darmstadt, Germany — has plotted a sophisticated course through the inner solar system.

The spacecraft’s “brakes” will be applied  just 60 days into the journey to reduce Bepi’s speed: an electric propulsion system and a total of nine planetary swing-bys (one of the Earth in April 2020, two of Venus and six of Mercury) will provide BepiColombo with the energy it requires.

A maximum of two of the four xenon-propelled ion thrusters will be employed at any one time during the long journey; these will be used on more than 700 days in total, up to four months of which without interruption.

The thrusters will be powered by two 1.8 x 14-metre solar arrays. The ion thrusters, a further chemical propulsion system and the solar arrays are located on the Mercury Transfer Module (MTM), the propulsion module for the interplanetary voyage to Mercury.

With the journey totaling some 8.5 billion kilometres – the equivalent of traveling from the Earth to Neptune and back again – Bepi will actually travel 38 times the maximum distance between the Earth and Mercury.

After traveling for seven years and completing 18 orbits around the Sun, the MTM will be jettisoned in 2025. From that point onward, the orbiters will power themselves using solar energy and their own propulsion system. The space probe will then swing into orbit around Mercury before each orbiter enters its own orbit and begins the actual scientific exploration of the planet.

In post-launch comments from the Spaceport, Arianespace Chief Executive Officer Stéphane Israël congratulated ESA and JAXA and underscored his company’s continuing contributions to space research and science at the service of such institutions. He said that this new success marks the beginning of a seven-year trip for BepiColombo, taking advantage of gravitational assistance from Earth, Venus, and Mercury. Arianespace is proud to have contributed to this new major scientific quest.

Israël then added that Arianespace’s latest Ariane 5 launch was special due to the spacecraft's Earth escape flight profile, and that such would not have been possible without the European launchers ‘dream team. This launch showed the versatility of Ariane 5 and double congratulations are in order for all of the partners for this new success.

Guenther Hasinger, the ESA Director of Science, stated that the firm is standing on the shoulders of giants, and the giants are all of you ([the participating companies]. He also thanked Arianespace for Ariane 5’s exact on-time liftoff and the spacecraft’s accurate deployment.

JAXA Senior Vice President Shizuo Yamamoto highlighted the excellent cooperation at the Spaceport launch site of Arianespace, ESA, the CNES French agency and the industrial teams that contributed to sending BepiColombo on its way to Mercury.