[SatNews] Airbus Defence and Space will deliver the radar antenna and electronics for the Republic of Korea’s new Earth observation satellite, Kompsat-6. 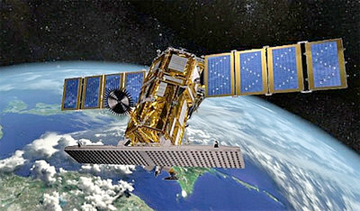 Artistic rendition of the Republic of South Korea's Kompsat-5 satellite.

The contract was signed in Seoul, in the presence of Peter Friedrich, Minister for International Affairs of the Federal State of Baden-Wuerttemberg, by Hyokoo Lee, CEO of LIG Nex1 Co. Ltd., and Eckard Settelmeyer, Head of Earth Observation of Space Systems in Germany. LIG Nex1 is accountable to the Korea Aerospace Research Institute (KARI) for handling all aspects of the radar sensor.

“The Kompsat-6 contract is an important export success for Airbus Defence and Space. It highlights the long lasting relationship we have established with KARI and other partners in the Republic of Korea. We managed to win it in the face of stiff competition,” commented Michael Menking, Head of Space Systems’ Earth Observation, Navigation and Science. “This will pave the way for further export successes in the fields of radar instruments and radar satellites.”

The Republic of Korea’s radar satellite Kompsat-6 is due to replace its predecessor from 2019 onwards. With clearly improved capabilities, Kompsat-6 is designed to be operated in various modes (SpotLight, StripMap and ScanSAR) with two polarizations and a sub-metre resolution. The Phased Array SAR (Synthetic Aperture Radar) technology from Airbus Defence and Space is highly regarded, as a result of successful missions including the European Earth observation satellites ERS-1 and 2, Envisat and MetOp and the radar satellites TerraSAR-X and TanDEM-X, which were developed by Airbus Defence and Space in Germany.

The Airbus Defence & Space infosite is accessible via http://airbusdefenceandspace.com/