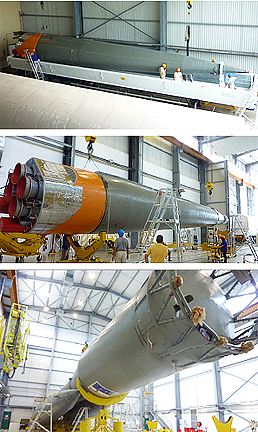 Integration of the initial two first-stage boosters is highlighted in this photo series. At top, one of the boosters is readied for removal from its protective shipping and storage container in the MIK integration building’s receiving area. In the middle photo, the booster is transferred into the MIK facility’s central area using mobile jigs aligned in the floor-level rail system. The bottom image shows Soyuz’ two boosters mated to its second stage central core, which is positioned on MIK’s “Paquetirovtchik” integration stand.
[SatNews] Assembly and checkout are next on the agenda...

Preparations for Arianespace’s second Soyuz mission from French Guiana are moving forward as assembly and checkout of the vehicle continue at the Spaceport. Its basic three-stage launcher is now taking shape in the MIK integration hall at the Soyuz launch site, located in the Spaceport’s northwestern sector near the town of Sinnamary. This process began with the horizontal mating of the second-stage central core’s upper and lower sections, using jigs aligned in the MIK facility’s floor-level rail system. The activity cleared the way for installation of the launcher’s four first-stage boosters, of which the first two were mated to its core center stage during the weekend. Its remaining two boosters will be added in the next step, to be followed by integration of the in-line third stage – completing the vehicle’s build-up in the horizontal integration process used for all Soyuz launchers.

Also in the MIK facility, the Soyuz’ Fregat upper stage continues to undergo its checkout, which includes validation of data communications. Once the Fregat’s preparations are complete, this stage will be moved to the Spaceport’s S3B clean room, where it will be integrated with the mission’s payload and fairing – creating the launcher’s upper composite section. The upper composite is to be installed atop the Soyuz once the vehicle is rolled out to the launch pad and erected in the vertical position, protected by a purpose-built mobile service gantry.