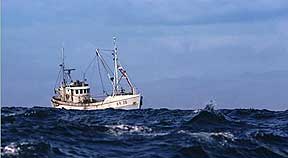 [SatNews] Iridium is known for their support in everything from assisting with disasters such as earthquakes, to the Alaskan sled dogs in the Ididirod run — and now Iridium Communications Inc. (Nasdaq: IRDM) has received orders for more than 100 Iridium OpenPort broadband satellite terminals for installation on Spanish commercial fishing vessels.

“Iridium OpenPort is very popular among Spanish fishing captains,” said Javier Ormaechea, CEO of Zunibal, an Iridium service provider in Spain. “They prefer Iridium OpenPort because of its worldwide coverage, including the important fisheries in the Pacific and Indian Oceans, and also its high-bandwidth data connections and competitive pricing for equipment and airtime.”

Ormaechea noted that many Spanish fishing vessel operators are using Iridium OpenPort to comply with the new European Union (EU) regulations for electronic log keeping and reporting. In a move to replace traditional paper logbooks and reporting, the EU has mandated that all fishing fleets operated by member states must transmit daily reports of catch, transshipments, landings and sales electronically to fishing authorities. The e-logbook regulations came into effect January 1, 2010, for vessels more than 24 meters in length, and the EU will extend the regulations to vessels more than 15 meters in length on July 1, 2011.

Lorenzo Dominguez, captain of the FV Gene, said that, in addition to meeting the EU e-logbook requirements, Iridium OpenPort provides a complete communication center for ship-to-shore voice and data calling.

“The three separate phone lines are very popular, since crew do not have to stand in line waiting to use a single phone circuit,” he said. “Our crew also uses Zunibal’s optimized satellite email software “Zunport” to send e-mails to families and friends at home, which is great for crew welfare.”

Antonio Gonzalez Cadilla, captain of the FV Mauel Alba, said, “We like Iridium OpenPort because it is less expensive than other satellite systems, in terms of the equipment, installation, maintenance and usage costs. The small antenna is easy to install and has no moving parts, greatly reducing the ongoing maintenance costs and improving reliability.”

Greg Ewert, executive vice president, global distribution channels at Iridium said that Iridium is in the advanced stages of planning for Iridium NEXT, the next-generation satellites that will replace the existing 66-satellite constellation starting in 2015.  “In the meantime, we expect our existing satellite network to continue providing robust and reliable service until the new satellites are launched.”