New eruptions from Iceland’s Eyjafjallajoekull volcano have produced a 1600 km-wide ash cloud over the Atlantic. The brownish plume, travelling east and then south, is clearly visible in stark contrast to white clouds framing this Envisat image from May 6th. 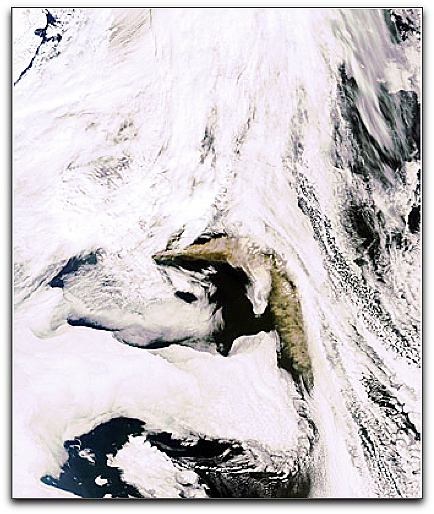 The volcano began emitting steam and ash on March20th, wreaking havoc on European aviation last month. Renewed activity earlier this week caused some flights to be suspended to and from Ireland, Northern Ireland and Scotland. Authorities are monitoring the position and height of the ash cloud as well as the direction of prevailing Atlantic winds, which pose a problem when they blow south towards Ireland, located 1500 km southeast of the volcano. Envisat’s Medium Resolution Imaging Spectrometer (MERIS) acquired this image. To see the latest MERIS images of the ash cloud, visit the ESA's MIRAVI website. MIRAVI, which is free and requires no registration, generates images from the raw data collected by MERIS and provides them online quickly after acquisition.