Early Wednesday morning (02:30 GMT), the EUMETSAT's Metop-A meteorological satellite crossed the equator for the craft's 50,000th orbit since the launch from Baikonur, Kazakhstan, in 2006.

Metop-A is operated by EUMETSAT, the European Organisation for the Exploitation of Meteorological Satellites, from their Darmstadt, Germany, headquarters. The data provided by Metop satellites are essential for weather forecasts up to 12 days ahead, as well as for climate and environmental monitoring. Metop-A flies in a near-circular, sun-synchronized polar orbit approximately 817 km above the Earth’s surface, moving at nearly 27,000km/h. 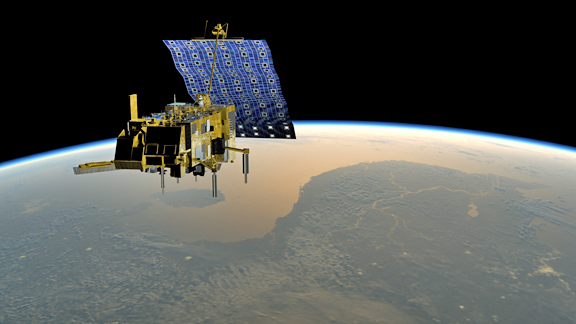 EUMETSAT Mission Control Systems Manager Gareth Williams said that, even though Metop spacecraft are designed to have a minimum lifetime of five years, Metop-A will celebrate its 10th birthday in space this October.

“This longevity means Metop has accumulated a very impressive record for operations and services which can be summarized in some fairly impressive statistics,” Williams said. "Since launch, Metop-A has traveled almost 2.3 billion kilometers. To give some idea of just how far that is, it is almost as far as from the Earth out to the orbit of the planet Uranus in the outer solar system.”

Williams said that, so far, Metop-A has recorded some very impressive achievements:

Almost every orbit of Metop-A has been supported by one of the two EUMETSAT Polar System (EPS) antennas in Svalbard, Norway. One or other of these antennas has locked onto the satellite each of the 50,000 times it came into view, configuring for the pass, tracking it from horizon to horizon, and then returning to a standby configuration.

“Over the past 116 months, Metop-A has downlinked more than 100 terabytes of raw meteorological data to be received in Svalbard, and sometimes also in McMurdo in Antarctica, to then be transferred to Darmstadt for processing,” Williams added. “This raw data was transformed into more than 67 million ‘products’ that were archived and or disseminated to users, such as the National Meteorological Services in EUMETSAT’s 30 Member States.” By the time Metop-A reaches the end of her life, she might even have reached orbit number 200,000, Williams said. “If so, she would have traveled a total distance of roughly 9 billion kilometers, a distance that would be an equivalent to traversing the minimum distance from Earth to the dwarf-planet Pluto—and back again."