....at the Spaceport in French Guiana, which will be launched by Arianespace in March aboard an Ariane 5 on an International Space Station servicing mission. This process is being performed in the S5B hall of the Spaceport’s S5 payload preparation facility, where the large cargo vessel was integrated and received its cargo.

Named after Italian physicist Edoardo Amaldi, the ATV will carry a fuel load estimated at 6,060kg. Of this total, approximately 2,200kg. is for use on the spacecraft’s travel to the International Space Station after launch by Ariane 5, and for the post-mission de-orbiting; some 3,000kg. will be consumed in attitude control and re-boost maneuvers while the ATV is mated to the International Space Station; and the remaining 860kg. is destined for transfer from the ATV to the station’s Russian portion.

Liftoff of the ATV Edoardo Amaldi is scheduled for March 9, carrying some 6,960kg. of dry cargo, water, gas and propellant for delivery to the ISS. Arianespace’s mission will follow Ariane 5 launches of ATVs in February 2011 and March 2008. The ATV program is managed by the European Space Agency, with production of the spacecraft performed by an Astrium-led industry consortium. 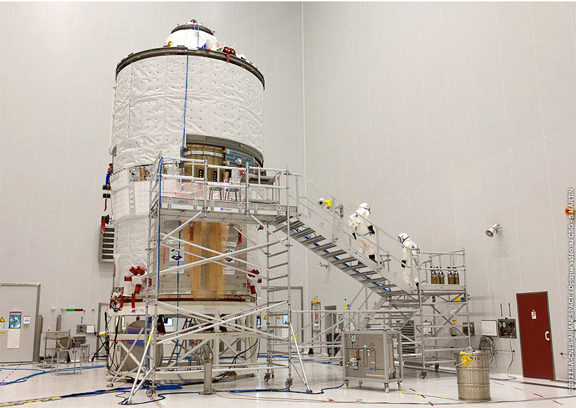 ATV Edoardo Amaldi is being fueled in the Spaceport’s S5 payload preparation facility. Photo is courtesy of Arianespace.

In separate activity, the cargo module for Europe’s fourth ATV, named after Albert Einstein, was transferred from its production location in Turin, Italy to Bremen, Germany, on December 30 for final testing. Shipment of the full ATV – consisting of the cargo section and service module – to French Guiana is expected in the second half of this year, for a launch on Ariane 5 targeted for early 2013.