....satellite has been launched from Baikonur, Kazakhstan. AMOS-5 soared upward aboard a Proton Breeze-M launcher this morning at 13.17 Israel time (11.17 GMT). En route to its 17 degrees East orbital position, the satellite is scheduled to separate from the launcher’s last stage within nine-and-one-half hours following ignition and later will unfold its solar panels and communication antennas. In the coming weeks, AMOS-5 will undergo a sequence of in-orbit tests, after which its manufacturer, ISS Reshetnev, will officially hand over control of the satellite to Spacecom. Commercial operation of the satellite’s pan-African C-band and Ku-band payload is scheduled to commence in early 2012.

The AMOS-5 heads toward its orbital slot from
Baikonur, Kazakhstan.

“AMOS-5’s launch further transforms Spacecom into a leading multi-regional satellite operator is truly a landmark event for us as we prepare to bring our reliable high-quality services to Africa,” stated Spacecom president and CEO David Pollack. “The satellite will offer excellent coverage and ready capacity to a rapidly growing region. Spacecom is excited and looks forward to providing comprehensive and quality communications solutions to Africa.” 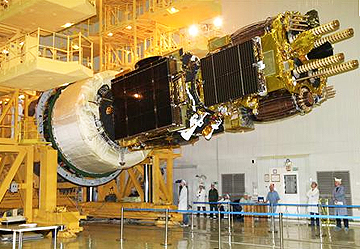 AMOS-5
AMOS-5’s high-power 14x72 MHz and 4x36 MHz C-band transponders, combined with 18x72 MHz Ku-band transponders, will enable it to be a prime carrier of African satellite communications traffic in both broadcast and data services in the years to come. Spacecom’s AMOS-2 and AMOS-3 satellites co-located at the 4 degrees West orbital “hot spot,” together with AMOS-5 at the 17°E orbital position, will provide coverage over many of the world’s fastest-growing and highest-demand satellite markets in the Middle East, Central and Eastern Europe and Africa. Prior to the launch, Spacecom pre-sold more than 55 percent of AMOS-5 capacity to a variety of customers, including broadcasters, telecom providers, communications companies and government agencies.
Topical Tags :
New Products
Manufacturing
Launch
Satellite Operator
Service Provider
Regional Tags :
Middle East/Africa
Europe