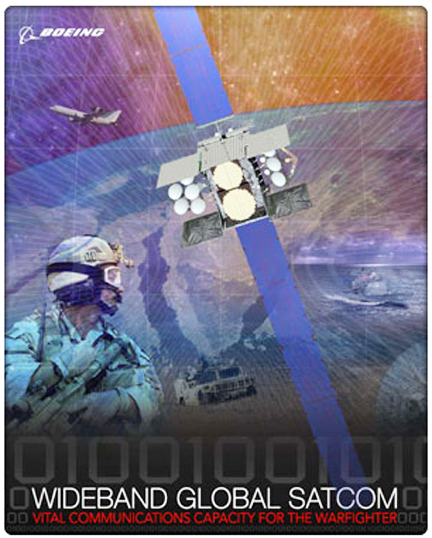 Wideband Global Satellite poster image is courtesy of Boeing
A senior military official says Canada's involvement in a U.S.-led military satellite program at a cost of $477 million will depend on whether four other countries sign on the dotted line by Dec. 15, according to a satellite industry publication. Lt.-Col. Abde Bellahnid, the Defence Department's director of space requirements, told a major military satellite conference in London this week that joining with New Zealand, Denmark, the Netherlands and Luxembourg to participate in the Wideband Global Satellite program makes financial and operational sense.

"What we have essentially decided together is to purchase a ninth WGS satellite," Bellahnid said Wednesday. "We have made our decision but we will know more after the 15th, when the (Memorandum of Understanding) is supposed to be signed by the five governments." Postmedia News first revealed in October that Canada was quietly preparing to join the program.

The Wideband Global Satellite system has been advertised by the U.S. Department of Defense as a communications system for "U.S. warfighters, allies and coalition partners during all levels of conflict short of nuclear war." The idea is to have as many as nine military satellites hovering over different parts of the world, ready to provide high-frequency bandwidth for U.S. and allied forces wherever they may be operating. Canada's involvement is known in the Defence Department as "Mercury Global." According to a Powerpoint presentation delivered by Bellahnid at the conference and obtained by Postmedia News, the Canadian Forces has been relying on commercial satellites that are insecure and increasingly expensive, reaching an expected $100 million per year by 2022. "The status quo was not acceptable," Bellahnid told conference participants. "It would cost too much — and the $100 million a year was just for the satellite segment. Considering the size of our forces, that's a lot. After a lengthy study, in 2011 we chose WGS based on a good business case. We have made our choice on the space segment, and we have approval to sign the MoU. But nothing is signed yet."

The presentation does anticipate Canada having access to the WGS network next year. It does not say how much such involvement will cost, but Bellahnid was quoted as saying the $477 million recently set aside by the federal cabinet includes all program costs over the next decade or so. The WGS has not been without its share of problems. While three satellites are now up over different parts of the world, their deployment was delayed by several years, with launch of the fourth tentatively scheduled for early 2012. In addition, the program has been listed alongside the F-35 stealth fighter in reports to the U.S. Congress as having budgetary problems. From an initial estimate of $1.3 billion for six satellites, a total of $4.9 billion has now been invested by the U.S., according to a spokeswoman with U.S. Air Force Space Command. The full nine-satellite network is expected to cost $10 billion.