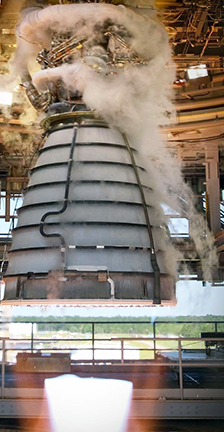 The controllers are key components in the RS-25 engine. Each of the four RS-25 engines that power the SLS first stage is equipped with a controller that communicates with the rocket while regulating engine thrust levels, and monitoring health and performance. The controllers, supplied by Honeywell, represent one of several technology updates being made to the engine, which generates 512,000 pounds of thrust at altitude.

With the recent delivery, Aerojet Rocketdyne has 18 of the modern controllers on hand, including 16 flight units, one qualification unit, and one flight spare. The flight controllers are undergoing testing at Stennis, with the latest test taking place on Oct. 31.

During the latest 500-second firing, the engine, an RS-25 unit used exclusively for ground testing, tested its 13th flight controller to fly on an SLS mission. The test also continued validation of modern manufacturing techniques that Aerojet Rocketdyne is incorporating into future expendable versions of the RS-25 to reduce costs while maintaining engine reliability.

These new components include an additively manufactured Pogo Accumulator Assembly, a beach ball-sized component that reduces vehicle oscillations during flight. This was the ninth successful test of an additive manufactured Pogo assembly. The firing also marked the fifth test for a new Main Combustion Chamber that was fabricated using an innovative bonding technique, known as Hot Isostatic Pressing or HIP.

Aerojet Rocketdyne has delivered all four engines for the first SLS flight, known as Exploration Mission-1 (EM-1) scheduled for 2020, and is now working on preparing engines for future flights beyond the first mission.