A Million+ Bucks Awarded By NASA To Masten + Armadillo

NASA will award $1.65 million in prize money Thursday to a pair of innovative aerospace companies that successfully simulated landing a spacecraft on the moon and lifting off again. NASA's Centennial Challenges program will give a $1 million first prize to Masten Space Systems of Mojave, California, and a $500,000 second prize to Armadillo Aerospace of Rockwall, Texas, for their Northrop Grumman Lunar Lander Challenge flights. The competition was managed by the X PRIZE Foundation. The Northrop Grumman Corporation is a commercial sponsor that provided operating funds for the contest to the X PRIZE Foundation.

An awards ceremony for the winning teams will be held at noon on November 5th in room 2325 of the Rayburn House Office Building in Washington. The Northrop Grumman Lunar Lander Challenge involves building and flying a rocket-powered vehicle that simulates the flight of a vehicle on the moon. The lander must take off vertically then travel horizontally, flying a mission profile designed to demonstrate both power and control before landing accurately at another spot. The same vehicle then must take off again, travel horizontally back to its original takeoff point and land successfully, all within a two-hour-and-15-minute time period. 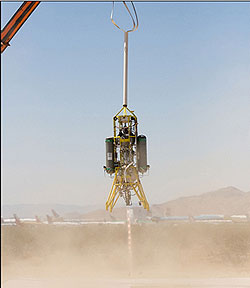 The prize purse is divided into first and second prizes for Level 1 and Level 2. Level 1 requires a flight duration of at least 90 seconds on each flight and Level 2 requires a duration of at least 180 seconds. One of the landings for a Level 2 attempt must be made on a simulated lunar terrain with rocks and craters. Masten Space Systems met the Level 2 requirements by achieving accurate landings and captured the first place prize during flights of their "Xoie" (pronounced "Zoey") vehicle October 30th at the Mojave Air and Space Port. Masten also claimed a $150,000 prize as part of the Level 1 competition.

Armadillo Aerospace was the first team to qualify for the Level 2 prize with successful flights of its Scorpius rocket September 12th in Caddo Mills, Texas. Armadillo placed second in the Level 2 competition, earning a $500,000 prize. The Masten team achieved an average accuracy of 7.5 inches while Armadillo Aerospace's average accuracy was 34 inches. The events of the past two months have brought the four-year Northrop Grumman Lunar Lander Challenge to a conclusion. All $2 million in prize money has been awarded.