This company's thermal vacuum was put to the ultimate test, including proving that the equipment can stand up to the frigid temperatures in the space environment for the Webb Telescope. This was the culmination of 15 years of work by the company's team enabling the telescope to collect universe data never previously observed. 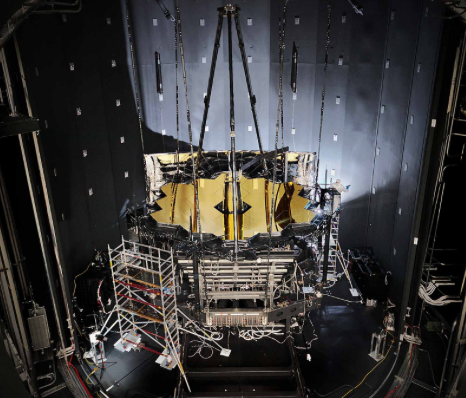 NASA’s James Webb Space Telescope sits inside Chamber A at NASA’s Johnson Space Center in Houston after having completed its cryogenic testing on November 18, 2017. This marked the telescope’s final cryogenic testing, and it ensured the observatory is ready for the frigid, airless environment of space. Credit: NASA/Chris Gunn

The Webb telescope will be the premier space observatory of the next decade, and will study galaxy, star and planet formation in the universe. Harris’ team helped safeguard the telescope in Houston during Hurricane Harvey and ensured uninterrupted testing — including monitoring more than 1,000 sensors on the telescope around the clock. In addition, Harris designed a multi-wavelength interferometer system that aligned 18 mirror segments into one 6.5-meter phased primary mirror to verify optical quality and placement.

Rob Mitrevski, vice president and general manager, Intelligence, Surveillance and Reconnaissance, Harris Space and Intelligence Systems said that this testing culminates 15 years of hard work by their Harris team, and that this extraordinary program is certain to dramatically increase their knowledge of the universe.

Harris engineers integrated all 18 mirror segments on the Webb telescope, as well as designed and installed the cryogenic test equipment, including a simulator to mimic the temperature of the Sun. Harris also built the structure that held and isolated the telescope during vibration and acoustic testing.

With environmental, thermal and optical tests complete, the Webb telescope will be shipped to California, where it will be integrated with the spacecraft, forming the complete observatory. The Webb telescope is designed to unravel some of the greatest mysteries of the universe, from discovering the first stars and galaxies that formed after the big bang to studying the atmospheres of planets around other stars. It is a joint project of NASA, ESA (the European Space Agency) and the Canadian Space Agency.