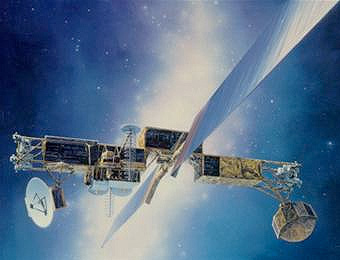 Milstar satellite
[SatNews] The U.S. Air Force has successfully demo'd over-the-air, low-data-rate communication between an orbiting Milstar satellite and the family of Advanced Beyond line-of-sight Terminals.

The FAB-T products include software-defined radios capable of protected communication, antennas and associated user interface hardware and software that will provide the government with a survivable and powerful system. The program is scheduled to enter flight testing in 1QFY2013 and exercise low rate initial production option in 3QFY2013. FAB-T is managed by the MILSATCOM Systems Directorate at Los Angeles AFB, Calif. The MILSATCOM Systems Directorate executes an annual budget over $2.4B as it plans for, acquires and sustains space-based global communications in support of the President, Secretary of Defense, and combat forces. The MILSATCOM enterprise consists of satellites, terminals and control stations and provides communications for over 16,000 air, land and sea platforms.