[SatNews] Utah State University's Space Dynamics Laboratory (SDL) announced on Wednesday that the U.S. Patent and Trademark Office has issued it a patent for a new invention by SDL research scientist Erik Syrstad. 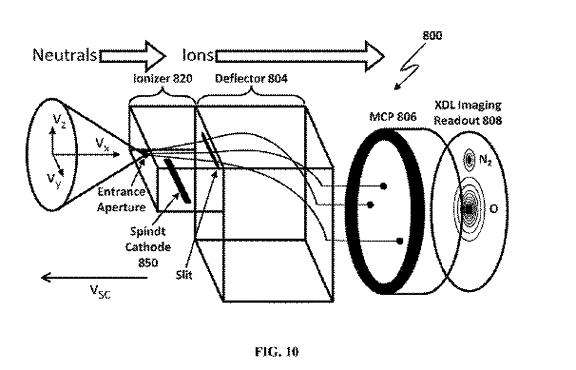 The Fig. 10 image from Erik Syrstad's patent application for IDEA.

"IDEA will sample gas and plasma particles in a region of space lying closest to Earth's atmosphere that is not well understood," said Syrstad. "The sensor is designed to efficiently separate and detect these particles, simultaneously measuring parameters such as wind, temperature, density, and composition." This data will help scientists better understand and predict the impact of space weather – upper atmospheric variability driven by energy from the Sun.

Using an imaging ion detector, IDEA produces continuous snapshots of the incoming atmosphere, from which small changes in wind, temperature, and density can be observed.  Compared to traditional space weather sensors, IDEA detects a much higher fraction of the sampled atmosphere. This results in higher signal and improved measurement accuracy, and allows this instrument to operate at much higher altitudes where the atmosphere is extremely thin. Ultimately, data collected by IDEA will help improve complex atmospheric models that are used to predict the impact of space weather events.  These events often result in degraded GPS and radio signals, spacecraft damage, and increased atmospheric drag that can alter a satellite's orbit.

"Innovation has been a trademark of our organization for over 50 years, and we are refocusing our efforts in this area as a strategic emphasis at the Space Dynamics Lab," said SDL director Niel Holt. "Erik and others at SDL continue to look for ways to invent and improve devices, systems and methods so that we remain competitive and relevant in the aerospace, science and defense industries."