The European Space Agency (ESA) and Airbus have signed a commercial partnership (PPP) agreement for the construction, launch and operations of the commercial "Bartolomeo" platform — Airbus' new external payload hosting facility will be attached to the European Columbus module of the International Space Station (ISS) from mid-2019.

The agreement defines the roles and responsibilities of the two PPP partners, with Airbus investing around 40 million euros into the development, construction and launch of this innovative platform, with ESA providing Bartolomeo’s installation on the ISS. Bartolomeo will be launched in the unpressurized compartment of an ISS supply vehicle and installed using the ISS robotics system and an extra-vehicular activity. Airbus is then responsible for platform operations and payload integration. 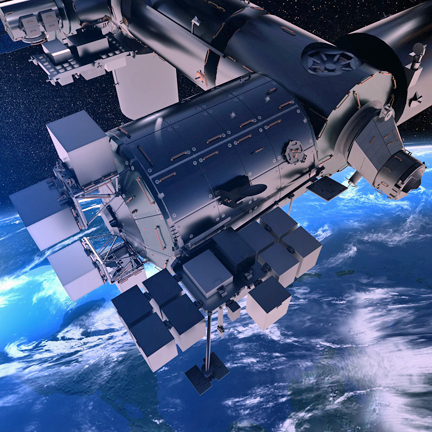 Artistic rendition of the Bartolomeo platform attached to ISS.
Image is courtesy of Aibus.

Named after the younger brother of Christopher Columbus, the Bartolomeo platform will offer 12 payload slots on the outside of the Columbus module. The growing number of commercial space users for payloads in the 100 kg. class is driving demand. The payloads do not require hands-on maintenance by astronauts and can be operated outside of the ISS.

The platform development has recently passed the preliminary design review and is on track for launch in May 2019. First payloads are then expected to be installed in the second half of 2019. Key to offering a service for smaller payloads is the General-purpose Oceaneering Latching Device (GOLD) — a new attachment mechanism for payloads of up to 125 kg. and 0.5 m³ developed by Airbus’ partner Oceaneering Space Systems in Houston, Texas. The two companies are also working on the system to attach the platform to the Columbus module using ISS robotics.

Oliver Juckenhöfel, Head of On-Orbit Services and Exploration at Airbus, reported that the company's role is to make access to LEO as easy as it possibly can be and open up the ISS to a global user community. The company is creating a cost and time efficient way for institutional and private organizations to bring their experiments into space as external payloads that can be launched just 18 months after signing a contract. With Airbus' All-in-One Space Mission Service, Bartolomeo users can concentrate on their payload, while everything else is taken care, from launch and installation, to in-space operations, communication links and even all the way to returning the experiment to Earth, if it is required.