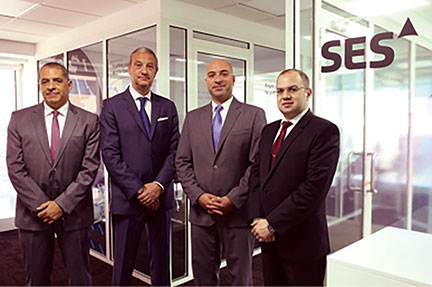 [SatNews]  Global satellite operator SES (NYSE Euronext Paris and Luxembourg Stock Exchange: SESG) has announced their reaffirmation of the firm's long-term commitment to the Middle East region through the opening of its Middle East office in Dubai, United Arab Emirates.

The Dubai office comprises an initial core team of highly-skilled employees in the fields of engineering, sales and business development, who in turn are supported on an international level through SES’s offices around the world. SES initiated operations in the Middle East in 2001 and, since then, the company has grown its investment on the ground and in space and has nine satellites serving the region’s ever-increasing demand for connectivity. In addition to a growing local presence, SES launched the inaugural SES Technical Academy in Dubai in 2014, a platform for knowledge transfer, bringing the latest industry developments from the United States and Europe to customers in the Middle East.

“Across many areas of the Middle East, satellite remains one of the most reliable forms of connectivity - and demand for data connectivity continues to grow. The opening of an office in Dubai reaffirms our long term commitment to the region, enabling us to be closer physically and to respond instantly to our customers' needs,” said Hussein Oteifa, General Manager Middle East at SES. “Additionally, our customers can leverage our global fleet of 54 satellites as well as our extensive product and services portfolio to significantly enhance their presence beyond the region.”

SES is a global satellite operator with a fleet of more than 50 satellites covering 99 percent of the world’s population. Together with its worldwide network of teleports, the operator provides satellite communication services to enable enterprises to deliver services such as point-of-sale transactions, maritime and aeronautical communications, mobile-banking, mobile backhaul, e-learning and telemedicine. SES can also provide a portfolio of satellite-related services, which includes high-speed satellite broadband services and ground infrastructure services.