[SatNews] SpaceX had great plans to land a portion of its Falcon 9 rocket on a floating barge off the Central Florida coast, but it wasn't meant to be.

Inclement weather on the Space Coast was cause to scrub the launch attempt for the day.  In fact, all was proceeding smoothly up until just three minutes remaining when controllers ordered a halt to the countdown scheduled at 4:33 pm EDT launch time at Cape Canaveral, Florida. That's when fast approaching storm clouds violated range safety requirements. With an instantaneous launch window, the hold in the countdown scrubbed the launch for the day. 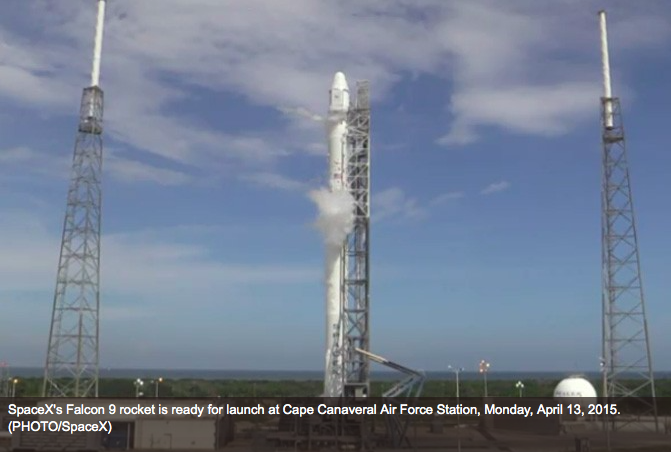 SpaceX's next opportunity to send its Dragon capsule, packed with 4,300 pounds of supplies and science experiments, International Space Station, is at 4:10 p.m. Tuesday. After which they will try to land stage one of the rocket vertically on a barge floating in the Atlantic Ocean which will lower the cost of space travel in the future.  Weather forecasts call for a 50-percent chance of acceptable weather at launch. Earlier forecasts projected a 60-percent chance of good weather for the initial launch attempt.

SpaceX planned to make a second landing attempt on the February launch of the Deep Space Climate Observatory spacecraft, but rough seas forced SpaceX to withdraw the ship. SpaceX later said the stage touched down on the ocean at the planned target site. “If the drone ship would have been there, it would have been a good landing,” SpaceX vice president Hans Koenigsmann said at the April 12 press conference.

That test made Koenigsmann more confident that SpaceX can land the Falcon 9 stage on the ship during this launch. “I would up my probability to 75 percent at this point in time,” he said. “Maybe 80.”

However, SpaceX chief executive Elon Musk was not as optimistic. “Odds of rocket landing successfully today are still less than 50 percent,” Musk tweeted April 13, prior to the scrubbed launch. “The 80 percent figure by end of year is only [because of] many launches ahead.”

This isn't the first attempt the company tried this once before, in January, and it didn't go exactly as planned. Because of a shortage of hydraulic fluid, the uncrewed rocket became destabilized and exploded as it hit the barge:

NASA and SpaceX have not revealed when the next launch opportunity would be should the launch not take place April 14. Dan Hartman, NASA deputy ISS program manager, said at a pre-launch press conference April 12 that a new launch date would depend on availability of the launch range, the status of the launch vehicle and spacecraft, and any requirements by scientists to change out experiments inside the Dragon.

Koenigsmann said that if SpaceX is able to land the stage on its ship, it would be transported back to port in Jacksonville, Florida, then transferred by truck to the company’s test site in McGregor, Texas. Depending on the condition of the stage, it could perform additional test flights there, similar to those flown by SpaceX’s earlier Grasshopper and F9R-Dev technology demonstrators.

However,  before the stage is sent to Texas for tests, Koenigsmann said at the pre-launch press conference. “First, there would be an epic landing party, I guess.”