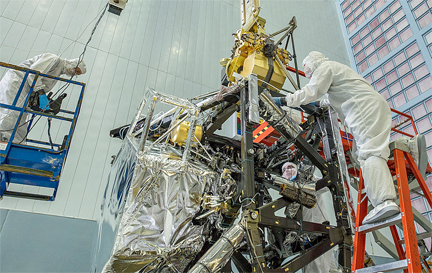 NASA technicians at the Goddard Space Flight Center carefully lower the Near Infrared Camera (NIRCam) into the heart of the James Webb Space Telescope to be installed in the Integrated Science Instrument Module.

The new Near Infrared Camera, or NIRCam, has been successfully integrated within the heart of the telescope, known as the Integrated Science Instrument Module (ISIM). The integration completes the suite of four instruments that together will explore the mysteries of the deep universe upon launch in 2018. NIRCam will function as the central imaging component of JWST. Designated one of the NASA’s three highest mission priorities, the Webb telescope is a joint project of NASA, the European Space Agency and the Canadian Space Agency.

NIRCam was designed, built, and tested by a University of Arizona / Lockheed Martin team at the company’s Advanced Technology Center in Palo Alto, California, under the leadership of Principal Investigator Marcia Rieke, a Regents' Professor at the Arizona Department of Astronomy/Steward Observatory. Lockheed Martin is responsible for the optical, mechanical, structural, thermal and electronic precision mechanisms and the control software of NIRCam, while its advanced infrared detector arrays come from Teledyne Imaging Systems.

"Integration of NIRCam into ISIM is a major step forward in the progress of the Webb telescope," said Jeff Vanden Beukel, Lockheed Martin NIRCam program director. "Now, NIRCam and the other instruments will be tested to prove their ability to function as a unit."

As the space telescope's prime camera, NIRCam will make JWST the most powerful space telescope ever built, enabling it to peer deeper into space and further back in time than any other instrument before. With its 6.5 meter (21 foot) mirror, JWST will allow observation of the most distant objects in the universe.

"The instrument operates out to wavelengths about ten times that of visible light, letting it search for the first galaxies. It is the cosmic redshift that has moved the outputs of these ‘first light’ sources into the infrared where NIRCam operates. We will survey selected regions on the sky to find candidates; the other instruments on JWST can then probe these objects in detail to test if they really are that young," Rieke explained. "NIRCam can also peer through the clouds of gas and dust that hide the first stages when stars and planets are born and will provide insights into how planetary systems form and evolve around distant stars.”

NIRCam is comprised of many cutting-edge technologies, such as the infrared detector arrays themselves, a complex optical system based on lenses rather than the mirrors used in most infrared instruments, and devices to measure the optical performance of the JWST telescope and allow adjustments to keep it operating correctly. Upon launch, JWST will be operated as an observatory open by competitive proposal to astronomers worldwide. The astronomy community is eagerly anticipating data from the mission, which is not only much larger than Hubble but covers the longer-wavelength infrared spectral range with unprecedented capabilities.

The new office further demonstrates the Corporation’s commitment to supporting the Israeli Defense Force and their “Move to the South” campaign.

Former Israeli Air Force Brig. Gen. Shelly Gotman was recently appointed as managing director of Israel for the company’s Information Systems & Global Solutions (IS&GS) business and will lead the office.  Lockheed Martin’s IS&GS business has been the number one provider of information technology solutions and services to the U.S. government for the past 19 years. It has been growing its international presence with major operations in the United Kingdom, Europe, and Australia. Current IS&GS customers include NATO; British air traffic management organization NATS; the Australian Tax office; and the United Kingdom Ministry of Justice.