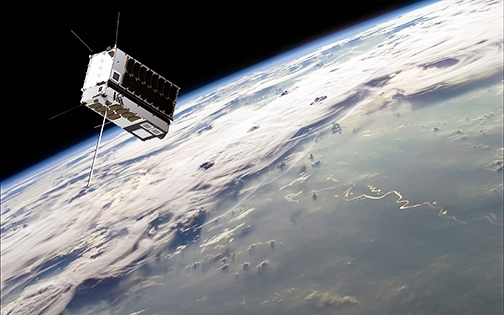 Artistic rendition of a HawkEye 360 Pathfinder smallsat, built by Space Flight Laboratory, launched into LEO on December 3, 2018, from Vandenberg Air Force Base, California.

Image is courtesy of SFL.

In the maritime sector, data gathered by HawkEye 360 can provide visibility for law enforcement into suspicious vessel behavior, giving them better information in their pursuit of illicit activity. Search and rescue efforts can be aided through geolocation of emergency beacons, even when broadcasting incorrect GPS coordinates. HawkEye 360’s spectrum analysis can survey usage of RF bands to maximize communication spectrum and avoid interference.

The company is using the Pathfinder satellites to perform data verification and strategic demonstrations with select customers. These efforts will inform enhancements to the next cluster of satellites currently under development for launch later this year. This next-generation of satellites will broaden the signal range, on-board-processing, and data capabilities as HawkEye 360 expands the constellation to achieve near persistent global coverage.

HawkEye 360 CEO John Serafini said the company is generating an entirely new data source for important commercial, defense, and intelligence applications around the world. As the first to be delivering this type of commercial data, HawkEye 360 will help customers make more timely and precise decisions. The HawkEye 360 team has shown unbelievable dedication and passion to reach a new milestone in space technology in just a few short years.”

Rob Rainhart, EVP of Engineering for HawkEye 360, added that the company is thrilled by the breadth of RF data the Pathfinder satellites are gathering from hundreds of miles above the Earth. The company has achieved much with early testing and continue to expand the types of signals the firm can geolocate. It’s exciting to have strong momentum as the company prepares to go to market with a full suite of commercially available analytics products over the course of 2019.