SciSys... It's All About Attitude Adjustment For CryoSat-2 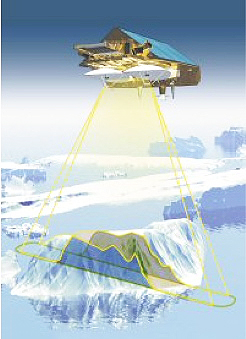 Artist's impression of CryoSat imaging an iceberg, image courtesy of EADS Astrium
The European Space Agency (ESA) successfully launched its CryoSat-2 mission from the Baikonur launch site in Kazakhstan. CryoSat-2 is a 3.5 year long radar mission that will monitor the thickness of land and sea ice and help explain the connection between the melting of the polar ice and the rise in sea levels and how this is contributing to climate change.

The SciSys on-board software will be responsible for monitoring the orbit and controlling the attitude of CryoSat-2 as well as handling all of its communications with the ground segment. SciSys has been involved throughout all the stages of the CryoSat-2 development, from enhancing and refining the original CryoSat software (the first mission was lost owing to a launch failure in October 2005), through integration, verification and validation of the software up to system level with the spacecraft. Along with the successful involvement in the CryoSat-2 program, SciSys is currently engaged in all of ESA’s on-going Earth Explorer Missions, developing software systems for ADM-Aeolus for atmospheric dynamics (2011), Swarm to survey the evolution of the magnetic field (2011) and EarthCARE to investigate the Earth's radiative balance (2013).