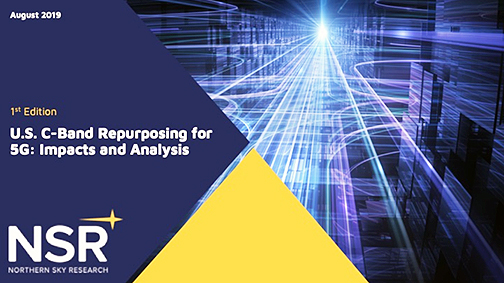 NSR’s U.S. C-Band Spectrum Repurposing for 5G: Impacts and Analysis report, released on August 7, provides a critical assessment of the potential for C-band repurposing, including the revenue and industry impacts of any FCC decision on spectrum sharing.

While initial requests call for 200 MHz of C-band reallocation in the U.S., NSR estimates that spectrum repurposed could go beyond this amount, generating a large windfall for the C-band Alliance (CBA) in the next 10 years. Given the current legal framework, the urgent need for spectrum, and the detailed implementation plan protecting current C-band users, it’s highly probable that the FCC will adopt the CBA’s proposal, at least along the main lines.

While repurposing of mid-band spectrum has created uncertainty for the satellite Industry in the U.S. and elsewhere, NSR’s U.S. C-Band Spectrum Repurposing for 5G: Impacts and Analysis, report assesses all the key elements behind the spectrum reallocation process.  Providing clarity on the most probable outcomes for this process in North America and the risk for contagion globally. It is a “must have” report for anyone seeking bottom line data and analysis on the urgent need to repurpose C-Band spectrum, the most probable future line of events and the impact on the satellite industry.

Lluc Palerm, NSR Senior Analyst and report co-author, said that while upgrading the C-band Ground Segment will be very complex and presents risks of delays, the biggest cost associated with spectrum repurposing will be for the Space Segment.

NSR Senior Analyst and report co-author Gagan Agrawal added that when the dust has settled, the proceeds from spectrum repurposing will certainly boost the coffers of CBA members, specifically Intelsat and SES — given both companies high market share in leased C-band capacity.