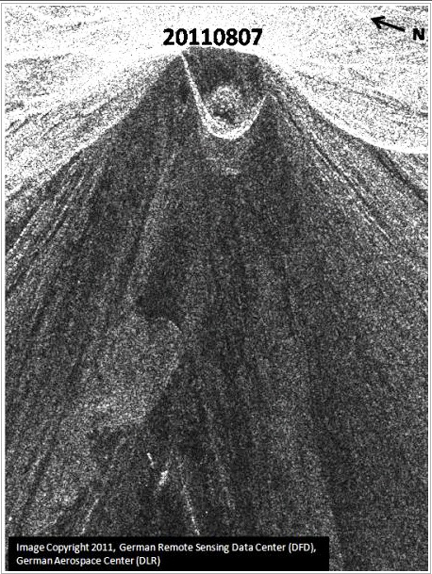 The VO has announced that a thermal anomaly was observed in satellite data over the past day, which is consistent with continued growth of the lava dome at the Cleveland volcano. No ash emissions have been observed during this current eruptive episode that began in mid-July 2011. No other new reports have been received regarding the volcano — however, the aviation color code is orange with the volcano alter level now at watch.

The current episode of dome growth resumed around September 3rd. A growing lava dome in the crater increases the possibility of an explosive eruption, but does not necessarily indicate that one will occur. Short-lived explosions could produce ash clouds that exceed 20,000 ft. above sea level. These events can occur without warning and may go undetected in satellite imagery for hours. If lava dome growth continues, it could overflow the crater rim to produce a lava flow and/or collapse to produce pyroclastic flows. Collapse of a lava flow or dome would likely result in the generation of a volcanic ash cloud. Without a real-time seismic network on the volcano, AVO is unable to track local earthquake activity related to volcanic unrest, provide forecasts of eruptive activity, or confirmation of explosive, ash-producing events. AVO will continue to monitor the volcano using multiple sources of satellite data. More information available at the agency's website, http://www.avo.alaska.edu/.