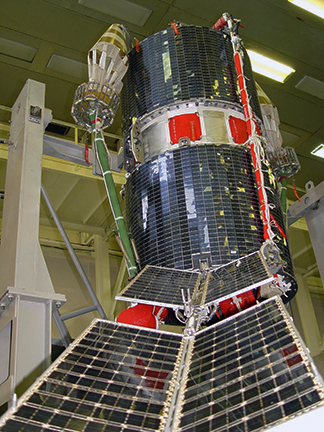 A Gonets-M satellite. Photo is courtesy of Roscosmos.

Russia’s State Space Corporation Roscosmos will deploy a new grouping of Gonets-2 satellites for the Internet of Things (IoT), according to Roscosmos Chief Dmitry Rogozin in a posting at the TASS infosite.

"We are deploying a new Gonets-2 grouping… This will be the Internet of things. This system is capable of promptly transmitting information from ground sensors," the Roscosmos chief said. "Sensors will be installed on the ground, in particular, on dams, bridges and railways. If their condition deviates from the norm, the sensors will transmit a signal to Earth’s remote sensing satellites within the Gosudarevo Oko (Sovereign’s Eye) system, which will start monitoring a particular facility and involve additional resources for re-transmitting the signal."

The Roscosmos chief spoke earlier about the proposal to create a system of remote sensing satellites to monitor natural resources and man-made processes. This task has been set to develop Russian regions and the national economy, he explained.

Roscosmos spokesman Vladimir Ustimenko earlier said that the project of the Sovereign’s Eye space monitoring system was at the stage of its approval in the relevant ministries and agencies. The project was also undergoing the stage of its feasibility study.