Orbit Communications Systems Ltd. announces their hearty salute to Israel’s Technion Institute of Technology on the inauguration of its first satellite ground station. The Technion’s Adelis ground station was completed by Orbit in a turnkey project integrating a 3.7-meter S-band Gaia 100 terminal with tower-mounted VHF and UHF antennas.

Prof. Pini Gurfil, Professor of Aerospace Engineering at the Technion and Director of the Asher Space Research Institute stated that they had a great working relationship with the ground station experts at Orbit  (TASE: ORBI).  Not only did Orbit come to the table with a lot of hands-on knowledge, Orbit was also very responsive to their evolving needs. 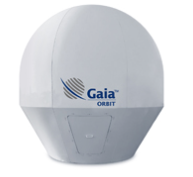 Orbit President and CEO, Eitan Livneh said that a key challenge of the Technion project involved making sure that both the 3.7-meter S-band terminal and smaller VHF and UHF antennas each had a clear line of sight. They resolved this issue by using an 11-meter communications tower alongside the radome. Their Gaia solution also answered the requirement that the ground station be compact and lightweight enough to be deployed on the roof of the building and be able to withstand the strong winds typical to the area.