NASA... CubeSats To The Forefront (Satellites)

[SatNews] NASA has selected 33 small satellites to fly as auxiliary payloads aboard rockets....

....planned to launch in 2013 and 2014. The proposed CubeSats come from universities across the country, the Radio Amateur Satellite Corporation, NASA field centers and Department of Defense organizations. CubeSats are a class of research spacecraft called nanosatellites. The cube-shaped satellites are approximately four inches long, have a volume of about one quart and weigh less than three pounds. The selections are from the third round of the CubeSat Launch Initiative. After launch, the satellites will conduct technology demonstrations, educational research or science missions. The selected spacecraft are eligible for flight after final negotiations and an opportunity for flight becomes available. The satellites come from the following organizations: 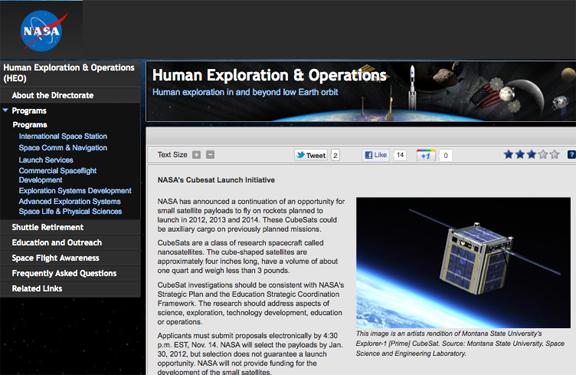